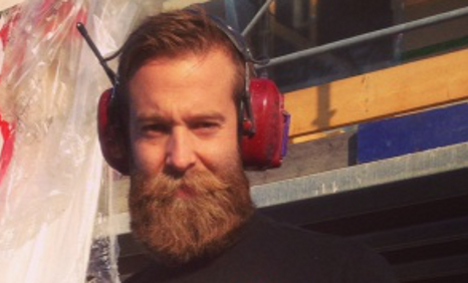 Best beard winner Kristofer Larsson. Photo: Pontus Flatum
Kristofer Larsson didn't grow his facial hair as a fashion statement, rather he was too busy to shave while he was renovating his family home.
But the carpenter from Varberg in west Sweden decided to take part in a national contest to find Sweden's best beard, with the final held at the Victoria Theatre in Malmö over the weekend.
An audience of around 150 people voted for him to pick up the prize, after he was shortlisted by an expert jury of beard watchers.
The two runners up in the competition both had neatly clipped beards, but spectators opted for Larsson's wild whiskers.

Larsson at work. Photo: Pontus Flatum
The Local was unable to reach Larsson on Monday.
His manager Pontus Flatum at construction company Toru Byggmontage said that his bearded colleague was the subject of "many jokes" at work as a result of his facial hair and noted that Larsson had been inundated with attention since his win.
"He is at home with his kids until Thursday," said Flatum.
"This has become bigger than anyone could have expected. Maybe we should celebrate with the Swedish classic Smörgåstårta when he arrives back at work," he added.
Smörgåstårta is a savoury cake often topped with prawns, salmon, eggs and vegetables, or roast beef. Let's hope it doesn't get stuck in his beard.