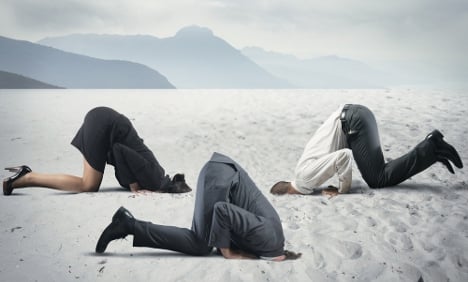 Do people from your country have their heads in the sand? Photo: Shutterstock
When asked about topics ranging from teenage birth rates to life expectancy, unemployment or immigration, Swedes provided more accurate estimates than any other European country, in a survey by pollsters Ipsos.
People from eight countries in Europe were questioned. Swedes also performed better than Australian, American, Japanese and South Korean respondents in the fourteen-country study.
Italians were found to be most ignorant, followed by people from the US.
Questions in the study included:
"In your opinion, what percentage of girls aged between 15 and 19 give birth each year?".
In Sweden, the correct answer is 0.7 percent. The average guess given by respondents was eight percent. This was an overestimation but much closer to the truth than answers provided in other countries.
US citizens thought that 24 percent of teenagers fitted into this category, whereas the actual figure there is three percent.
The report found that all nations overestimated the number of unemployed people, immigrants and Muslims living in their home country.
One of the least accurate answers given by Swedes was about pensioners. Respondents thought 33 percent of the country's population was over 65, whereas the real figure is 19 percent.
More than a thousand volunteers aged between 16 and 64 were quizzed in each country by pollsters, except in the US and Canada where all participants were over 18.
Perils of Perception – Global from Ipsos MORI