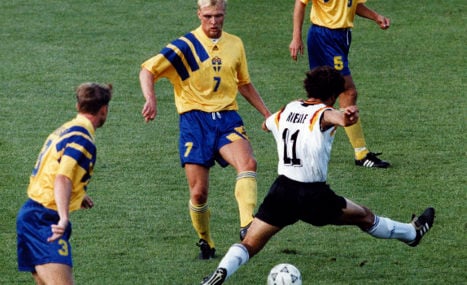 Ingesson (centre) played for Sweden in the 1994 World Cup

Ingesson was one of the country's best known football stars in the 1990s.

He played for Sweden 57 times and was part of the squad that finished third at the 1994 World Cup in the United States.

After his career on the pitch, he turned to coaching. He left his most recent job as a coach at Elfsborg in October.

He had been suffering from multiple myeloma, a cancer that affects white blood cells, since 2009.

During his playing career, Ingesson turned out for English side Sheffield Wednesday as well as clubs in France, Italy, Belgium and the Netherlands, having begun his career at IFK Gothenburg.

The star's name was trending worldwide on Twitter on Wednesday, with tributes paid by several international football stars as well as world football governing body FIFA, which also posted a video of Sweden's key moments at the 1994 World Cup.