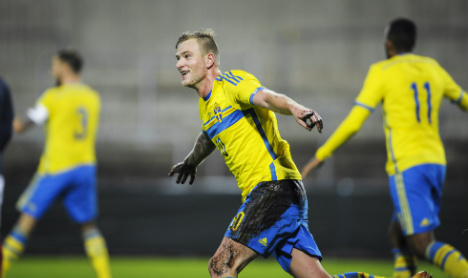 John Guidetti's rich vein of form in front of goal continued as his solitary strike sealed a 1-0 win over Inverness Caledonian Thistle that moved the Hoops up to third in the Scottish Premiership.

The Scottish champions dominated the first half but a well-disciplined Inverness defence limited the hosts to long-range efforts from Virgil van Dijk and Scott Brown.

However, it took just three minutes of the second half for in-form Swedish striker Guidetti to fire Celtic in front for his ninth goal in nine games since joining the club on-loan from Manchester City on transfer deadline day.

A nervy-looking Celtic then survived a late Inverness surge to record their third consecutive clean sheet in the league.

The Hoops, who have now won three Premiership games in a row for the first time this season, are just two points behind new league leaders Dundee United with a game in hand.

With the win in the bag the Glasgow club's attentions shifted to a pending Old Firm clash as they were drawn against long-standing rivals Rangers in the Scottish Cup.

The fierce rivals haven't met since April 2012, when the pair last clashed in Scotland's top flight.

Rangers were forced to start life again in the country's bottom fourth tier after the old company was liquidated in May of the same year and are currently second in the Championship as they bid to return to the Premiership next season.

The pair will now meet at Hampden at the start of February next year as they bid to make it through to the League Cup final.

The match, the first time the sides have met in the competition since 2011 when Rangers defeated their rivals in the final, will hand Hoops manager Ronny Deila his first experience of the fierce Old Firm derby since he arrived in Glasgow in the summer.

The Norwegian manager has now guided his side to five straight wins in all competitions after making a shaky start to his Celtic career and is looking forward to testing himself in the white-hot atmosphere of an Old Firm match.

"It's going to be a huge game and hopefully we will win and make it even better," Deila said.

"I haven't been at an Old Firm game before but I am looking forward to experiencing it.

Deila will be hoping that his Scandinavian strike force will continue to produce the goods as the season progresses.