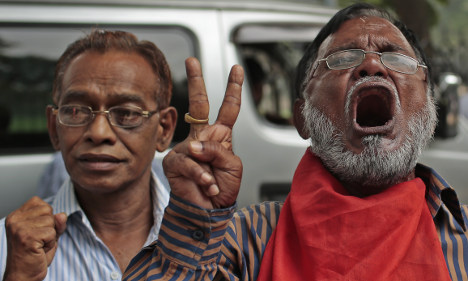 Protestors outside the war crimes tribunal in Dhaka. Photo: A.M. Ahad
Zahid Hossein, who is also a former leader of the Bangladesh National Party, was found guilty of charges including rape, torture and arson by a war crimes tribunal in Dhaka on Thursday.
According to the court, he also forced Hindus to convert to Islam and was directly involved in the killing of around fifty people.
He was tried in absentia and Bangladesh's chief police commissioner Hassan Mahmood Khandker believes he is currently living in Sweden, which does not have an extradition treaty with Bangladesh.
"We will do our best to get him back," he told the Reuters news agency.
Zahid Hossein disappeared from his home country last year and is understood to have relatives in Sweden.
The crimes he is accused of allegedly took place after Bangladesh broke away from Pakistan in 1971, following a bitter nine-month war between nationalists supported by India, and the Pakistani military.
Last November, two other Islamist leaders living in the UK and the US were sentenced to death for war crimes in absentia. Neither has yet been brought back to Bangladesh.
Human rights groups have criticized the war crimes tribunal in Bangladesh and there have been violent protests from those who oppose the series of trials it has been holding in Bangladesh since 2010.
The Bangladeshi government has denied that the inquiries fall short of international standards.