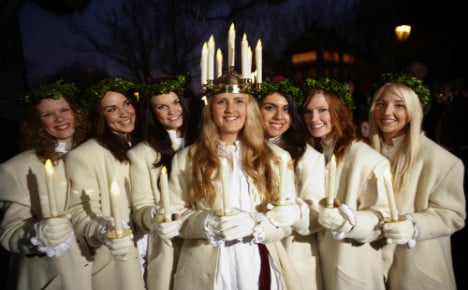 Swedes celebrate Lucia on December 13th and the occasion involves a procession led by a girl who wears candles on her head (representing Saint Lucia or Saint Lucy as she is usually known in English) along with a long white gown, singing songs to honour St. Lucy and mark the long nights of the Scandinavian winter.

However, interest in finding a local girl to become a Lucia is becoming increasingly difficult. Swedish Radio's Culture News reported in 2012 that the number of municipalities without an official Lucia was as high as 30 percent, with the number this year is likely to exceed that.

In the Lidingö suburb of Stockholm the vote to find a Lucia has been canned, as only one candidate has put themselves forward. In Aneby, southern Sweden, the municipality hasn't even been able to gather seven participants to form a choir.

Elsewhere in Hudiksvall, northern Sweden, they have barely managed to find seven people for the choir while the occasion in Njutånger, also in the north, has been axed altogether due to a lack of interest.

"Lucia is often run by associations and all activities based on voluntary work are struggling now," Mats Nilsson, senior lecturer in ethnology in Gothenburg University told the TT news agency.

Another theory attributed to the wane in interest is that the occasion now feels out of date.

"To hold a beauty pageant may not be the modern thing to do these days," he says.

Agneta Lilja, ethnologist at Södertörn University, goes along with that view.

"There is a certain resistance that it is a beauty pageant. Things become out of date if they don't have any actual function," she says.

In Sweden Lucia has long been a part of Christmas traditions. In schools and workplaces, a nominated girl or young woman will don a white dress and wear a wreath of candles on her head.