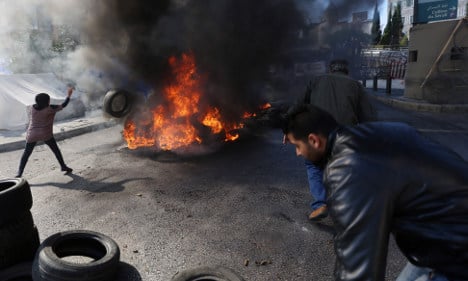 A recent suspected Isis attack in Lebanon. Photo: Bilal Hussein/TT
The man told Norwegian news network NRK: “There are cells awaiting orders, and there is more than one group.”
NRK met the defector at a secret location in Turkey, near the border to Syria.
The man claimed to have a background as a special soldier for Isis (also known as the Islamic State or IS) and said he had defected from the terror group a few months ago.
He spoke about Isis members in Europe and mentioned Sweden as one country where cells were hiding.
“I received a call from a friend who got threats from Isis in Sweden,” he told the broadcaster.
What should Sweden's government do about Isis fighters?
Sweden's Security Service, Säpo said it was concerned about the claims.
"Violence promoting Islamist extremism is a problem on both a Nordic and a European level," Fredrik Milder, a press officer for Sapo told Swedish broadcaster SVT.
He added that Sapo was working with other countries to exchange information about Isis.
"For us who follow closely counterterrorism and know the challenges for the security services the claim that there are sleeper supporter cells is not surprising," terrorism expert Magnus Ranstorp told The Local.
"There are key ISIS facilitators and recruiters in Sweden who talentspot new recruits and provide logistical support. The fact that they are present does not necessarily translate into terror attack here [in Sweden] but individuals could be matched up with others in Europe to plot terror attacks," he added.
In July, Säpo said it had evidence that least 80 individuals from Sweden had travelled to Syria to engage in combat with extremist groups.