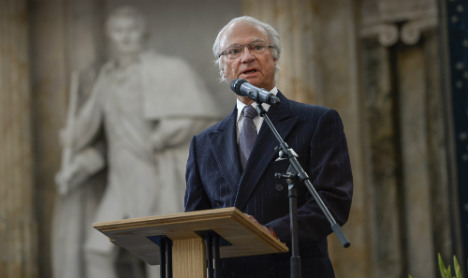 In an open letter to Mahmoud Abbas, president of the Palestinian Authority, the long-serving monarch said he wanted to send his "best wishes" for its national day, which fell over the weekend, on November 15th.

Middle Eastern media reported that the move by the Swedish King was the first recognition by a European royal marking Palestine's 1988 declaration of independence.

Palestinians have been celebrating their national day on November 15th for the last 26 years, after it was declared by former leader Yasser Arafat. Sweden's head of Middle East and North Africa department with the department for foreign affairs, Robert Rydberg, said the move by King Carl Gustaf was a "first."

In a statement released by the Swedish Royal Court they said it was standard procedure for the King to send letters of congratulations to countries to mark national days of independence.

"Sweden's head of state sends, according to the usual routine in co-operation with the department of foreign affairs, telegrams on the national day to all countries.

"As the Swedish government has recognised the state of Palestine, it has also been sent on Palestine's National Day," the Royal Court said in a statement released to the TT news agency.

Following the announcement Israel recalled its ambassador to Sweden, Isaac Bachman, back to Jerusalem for crunch talks. Bachman said at the time of the decision that it was "premature and counterproductive."

Last week The Local reported that the Swedish ambassador to Israel said that his country's decision to recognize Palestine was done to help secure peace in the region.