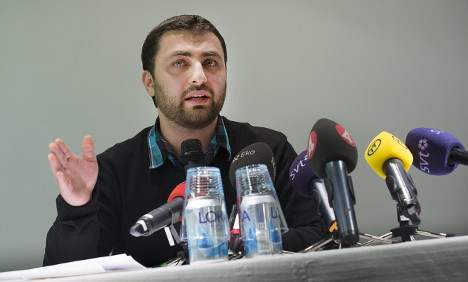 The Islamic Association of Sweden's chairman Omar Mustafa. Photo: TT
Around eighty extremist groups were listed by the UAE, with Islamic organizations in Sweden, Norway and Denmark featured alongside the likes of the Islamic State (Isis) and al-Qaeda.
The Islamic Association of Sweden's chairman Omar Mustafa said it was "frightening that a small regime known for human rights abuses defines European civil society organisations as terror groups".
Speaking to the TT news agency, he described the decision as "ridiculous".
The UAE's list is part of the country's clampdown on terrorist activities, in line with the anti-terror law issued by President His Highness Shaikh Khalifa Bin Zayed Al Nahyan in August.
On Monday, Nordic terrorism expert Magnus Ranstorp told The Local the list was a "game changer", because it "puts terror groups recognized by the EU and the UN alongside a second category of Muslim groups that are certainly not terrorist organizations".
He sad that the UAE had singled out Islamic associations in Scandinavia with links to the Muslim Brotherhood (or al-Ikhwan al-Muslimun in Arabic), one of the world's oldest and largest Islamist organizations.
The group was recently in power in Egypt under former President Mohammed Morsi, but was ousted following violent protests in 2013.
"Maybe the UAE does have information that it is not sharing, but I think it is more that these organizations in Sweden and Europe are seen as part of the umbrella of the Muslim Brotherhood," said Ranstorp.
"The UAE's decision is linked to the politics and power struggles going on in Egypt," he told The Local.
But he added that it was possible that "certain dodgy individuals" in Islamic organizations in the UAE could be helping to fund Scandinavian groups connected the Muslim Brotherhood and said that UAE would want this to be stopped.
The Islamic Association of Sweden has repeatedly denied that it is part of the Muslim Brotherhood, stating that it takes "inspiration" but not orders from the group.
According to Magnus Ranstorp, the new categorization of Scandinavian Islamic associations as "terrorists" could lead to some Muslims being unable to visit family members in the UAE.
"It is unclear exactly how laws will be applied by the UAE but this could lead to restricted travel movements for some people".
The UAE said it would impose harsh penalties on anyone who is connected to groups on its new list.
“Whoever seeks or communicates with a foreign state, terrorist organization or with anyone who works for their interests, to commit any terrorist act, shall be punished with imprisonment for life while the death penalty will be imposed if the terrorist act has been carried out,” reported Gulf News.
In August, the UAE toughened anti-terrorism laws in a bid to stamp out terror financing, hostage-taking, human trafficking and money laundering.