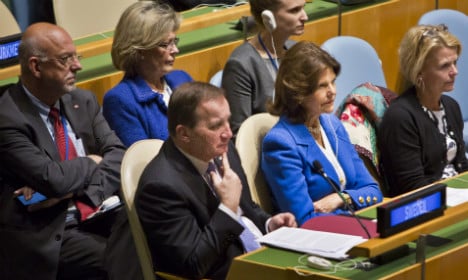 At a function to celebrate the 25th anniversary of the Unicef Convention on the Rights of the Child Löfven, together with children's minister Åsa Regnér and Queen Silvia, said he intended the bill to become law next year.

"The stage is passed to us. We want it to become Swedish law and now the inquiry will get additional directives. It will provide suggestions on how a Swedish law might look like," Regnér (pictured below) told reporters.

The Unicef convention states that everyone under the age of 18 (the definition of a child), regardless of gender, origin, religion or possible disabilities, needs special care and protection because children are often the most vulnerable.
Today, 193 countries have ratified the convention, making it the most widely ratified human rights agreement in the world.
Sweden signed the original treaty, which is designed to protect children around the world, back in 1989 but despite repeated calls has never implemented into Swedish law.

The previous government appointed a commission to analyse whether the convention should become law in Sweden.

Queen Silvia, founder of the humanitarian organization Childhood Foundation, described the landmark treaty as "one of the most beautiful acts." "It should not only be beautiful on paper but in all our hearts too. But we must continue and really fight for it," said Queen Silvia.

Löfven participated in a panel discussion and referred to his time spent in a foster home in his youth. He said that for him it was a great upbringing but that wasn't necessarily the case for every child.

"Therefore it is very rewarding for me, both personally and politically, to be here today," said the Prime Minister.

He added to Sveriges Radio that he hoped that the bill would become law by the middle of 2015.

"But we need to analyse more how the status of the child convention treaty will have an influence in relation to the constitution and other laws," he said.

The Prime Minister wraps up his trip to New York on Friday with a visit to a school in the Bronx.