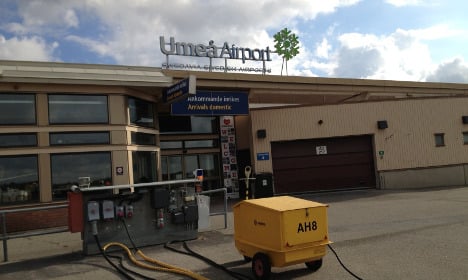 Umeå airport. Photo: scaplan1/Flickr
Two boys aged 17 and a girl, 16, were planning to travel to Istanbul via the Swedish capital, Stockholm, according to a member of the Muslim community speaking to regional newspaper Västerbottens Kuriren.
Mohamed Artan, 20, who works for SATA, a not-for-profit organisation run by defectors from militant Islamic groups told the paper that the trio were tracked down "at the last second" before they boarded a plane last month.
He said that members of his group were on alert for young militants planning to leave the country and had tracked down the teens after "blending in" with other passengers at the airport and then approaching the friends.
"They caught sight of these three young people and suspected something was amiss. They started talking to them and it came out that they were going to Turkey and on to Syria," Artan told the newspaper.
He said that the teenagers had planned their journey in detail without their families knowledge and that the pupils' parents had picked them up from Umeå airport once they had been made aware of their intentions.
We have to talk about Sweden's Isis fighters
Artan described himself to the paper as a former member of the radical Islamic group Al Shabaab.
He said his new organisation was made up of "sixty to seventy people who actively intervene and prevent radicalized youth joining militant organizations", for example by patrolling Swedish airports randomly or following tip-offs.
The Local was unable to reach Mohamed Artan on Monday.
A spokesperson for the Swedish security service, Säpo, said SATA was not a group that was being monitored by the service.
"We are not placing a judgement on the group that has been talking to the media," Fredrik Milder from Säpo told The Local.
A spokesperson for Umeå airport said that border control police at the terminal had not been involved, describing the case as "about three people planning to make a domestic connection".
As many as 300 Swedes could have joined the Islamic State insurgency, Sweden's intelligence chief said over the weekend.