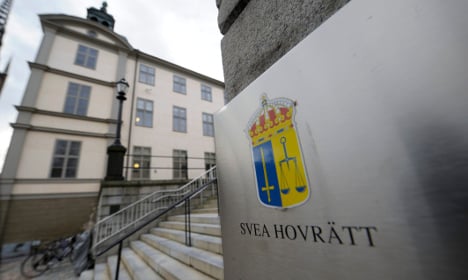 Svea Court of Appeal in Stockholm. Photo: Leif R Jansson/TT
Just two weeks after the cancer patient's death at a hospital in Uppsala, his widow, daughter and granddaughter were at home watching television when they noticed the man on the screen. His face was covered by a mask, but he remained recognizable to his relatives.
"It just so happened that they saw him," the family's lawyer Clarence Crafoord explained to The Local on Wednesday.
"The widow in particular got a really serious shock, as all of the work in handling her sorrow just disappeared".
He said that the family was "very upset" to learn that their relative's final moments had been caught on camera and that he had been "surrounded by a film crew" as his life came to an end.
The verdict, which was handed down by the Svea Court of Appeal in Stockholm followed a seven-year legal battle by the family.
They argued that while television producers should not be banned from filming in public places such as hospitals, they should take greater care to secure consent from patients.
Crafoord believes that the case will force production companies to enter into stricter agreements with local authorities, patients and families when shooting documentaries in sensitive locations such as hospitals in future.
"The family is so happy now. They gave each other a big hug after the verdict and they were almost crying with happiness. They didn't do it for the money but because they didn't want others to be in the same situation as them," he told The Local.
The damages will be paid by Uppsala County Council.
Uppsala University Hospital – which gave Swedish television network TV3 permission to film the programme – said that it had already changed its filming policies.
"We have made every effort to avoid such a situation arising again," Henrik Pederby, a spokesperson for the hospital said in a statement.