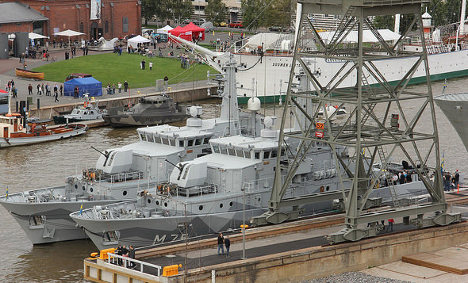 Staff on HMS Vinga and HMS Ulvön are linked to the scandal. Photo: Flickr/V-P Kivimäki
The Swedish military has admitted naval staff working on HMS Vinga and HMS Ulvön abused the radio system to send private messages and announced that it is holding a meeting on Monday to discuss the "inappropriate behaviour" with the ship's crews.
"There were people having conversations about their love lives," Jimmie Adamsson, a spokesperson for Swedish military confirmed to The Local on Friday. The transcript indicated the couple were romantically involved with each other, he confirmed.
"The radio system is something they are supposed to use for non-sensitive military matters, such as ordering in food".
"It seems that they were lazy or bored and they wanted to chat to each other," he added.
The messages were sent during an autumn exercise in the Baltic Sea earlier this month and were intercepted by amateur radio enthusiasts who then published the details on the Russian site Radio Scanner.
Adamsson said it was unclear from the transcripts whether the staff involved were men or women.
He said there was no indication that the workers had also used the radio text system to discuss secret or classified military information, adding that all members of the Swedish military were "well aware" of the risks during the current political climate.
The staff linked to the scandal would not be sacked, he also indicated.
Last month, Swedish warships, minesweepers, helicopters and more than 200 troops scoured an area in Stockholm's archipelago, following reports of a "man-made object" in the water.
The Swedish military later said it was "confident" that a small foreign submarine had been present in the area, but that it could not be sure which country the vessel had come from.
Sweden's government has said it is concerned about increasing Russian military activity in the region.
Speaking to The Local earlier in November, Defence Minister Peter Hultqvist said: "I think that there is a new security situation in the Baltic Sea…so we have a new environment and we have to handle that".