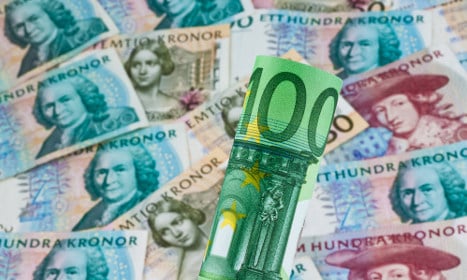 Sweden's economy is growing slowly. Photo: Shutterstock
Statistics Sweden, the country's government-funded facts and figures agency, reported that GDP grew by 2.1 percent in the third quarter compared with the same period last year.
This was an 0.3 percent increase on the second quarter and slightly more than the 0.2 percent rise that analysts expected.
The chief economist at Swedish bank Handelsbanken told news agency TT that domestic consumption was driving economic growth. Jan Häggström said that "residential investment" and rising property prices were also having an impact.
Rival bank Nordea's leading economist Annika Winsth said that "stronger retail sales than expected" were the most crucial reason for the growth.
"We have weak exports and mediocre investments, except in construction," she said in an interview with Swedish television network SVT, adding that "consumption is the engine of the economy".
Retail sales rose 4.5 percent in October compared with the same month last year, according to Statistics Sweden, also a larger increase than analysts had expected.
Swedish shoppers embrace 'Black Friday'
But Winsth told SVT that she believed Sweden's Riksbank had been too optimistic in its forecast for 2015, as a result of Sweden's weak exports.
"Our assessment is that growth is more likely to be around 2 per cent…compared to the nearly three percent it predicts," she said.
Earlier this week the Organisation for Economic Cooperation and Development (OECD) also lowered its 2015 growth forecast for Sweden from a previous prediction of 3.1 percent, to 2.8 percent.
"A stronger than expected growth in the EU and other major trading partners would improve growth prospects considerably," it said in a statement.