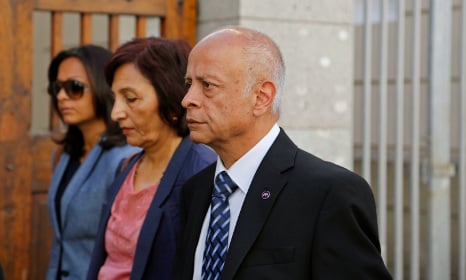 "Don't let Shrien Dewani walk away without giving us, South Africa and people from all over the world the full story," Anni Dewani's brother Anish Hindocha told a news conference on Wednesday.

Western Cape High Court Judge Jeannette Traverso will rule next Monday on an application by Dewani's lawyers to have the charges thrown out because of alleged weaknesses in the prosecution case.

It would be a "terrible development" if Dewani was allowed to leave South Africa "without explaining himself what happened on the night when my sister got murdered", Hindocha said.

Dewani, 34, is accused of masterminding the murder of 28-year-old Anni Dewani (nee Hindocha) during their honeymoon in South Africa in November 2010.

Prosecutors say he hired hitmen to kill her in a staged hijacking because, as a gay man, he felt forced into the marriage by family pressures.

Both families – the Dewanis and the Hindochas – are of Indian origin, and have sat on opposite sides of the courtroom throughout weeks of testimony.

Hindocha, flanked by three of Anni's cousins from Britain and Sweden, pointed out that Dewani had insisted through his lawyers that he wanted to clear his name and would help the court with his own version of events.

"Tell it then!" he demanded.

The sensational trial has had heavy media coverage locally, with members of the public launching a petition to have the judge removed from the case for allegedly showing bias against the prosecution.

Hindocha said the family had nothing to do with the petition.

Dewani returned to Britain within days of the murder and fought a three-year legal battle to avoid being extradited to South Africa, claiming he had mental health problems, including depression and post-traumatic stress.

But he was sent back to South Africa in April, where he was found fit to stand trial.

He is being held at Cape Town's Valkenberg psychiatric hospital for the duration of the court hearing.