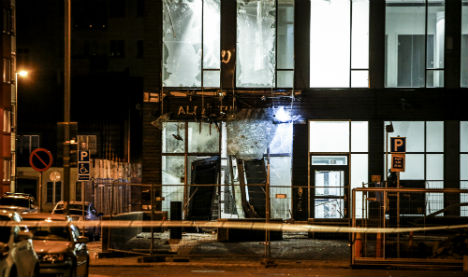 The aftermath of a bomb attack on a Malmö justice centre on November 30th 2014. Photo: Stig-Åke Jönsson/TT

In a threat delivered over the phone to the courts' main switchboard, the person said that the bomb would be detonated at one of the district courts dotted across the country.

It was suggested that a bomb would be detonated at a district  court in either Gothenburg, Stockholm, Örebro or Uppsala.

"I can confirm that some kind of threat has occurred. We have also been in contact with the district court in Gothenburg but right now there is no activity in the case," Ulla Brehm, press officer with the Västra Götaland told the TT news agency.

According to police, the bomb threat was not accompanied by any specific information such as the time and place when the bomb would go off.

"But the police in Stockholm believe that according to the information they received that there wasn't a risk that the threat was carried out," added Brehm.