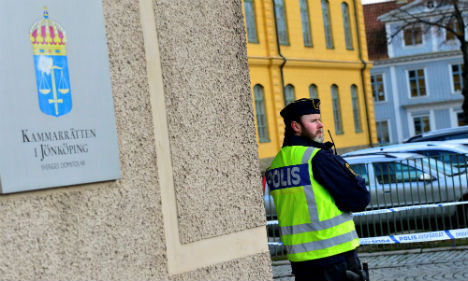 A policeman stands guard outside the Jönköping court of appeal on December 8th 2014. Photo: Johan Nilsson/TT

Over 150 people were forced to flee the Göta court of appeal in central Jönköping after the bomb threat was delivered over the phone. According to the court's head of security the threat is linked to a pending case.

"We have evacuated three court houses and we've cordoned off the area around the entire court of appeal square. The police regard this as an acute situation," head of Camilla Brännström told the TT news agency.

Local newspaper Jnytt reported that bomb technicians with dogs were on their way to Jönköping to search the premises for suspect devices after the threat was delivered.

Some of the staff have moved to the local library to continue work while others have gone home said the court's head of security.

"As things are at present we haven't found anything. We are currently searching through the area and bomb specialists are on the way," Tommy Thorngren, press spokesperson of the Jönköping police told Swedish newspaper Aftonbladet.

Police lifted the cordon shortly after midday after bomb disposal experts combed the area and reported back that they had found no suspicious devices which could be linked to the threat.

The threat is the latest in a series of incidents involving potential attacks on justice centres. Last week four district courts were targeted with bomb threats after a caller rang in to say a device would be be detonated at a district court in either Gothenburg, Stockholm, Örebro or Uppsala.

However, the bomb threat was not carried out at any of the locations.

A few days previously a justice centre in Malmö was bombed in what was the second attack on the building in the space of a year.