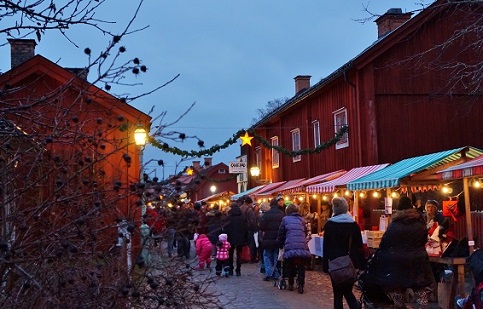 It's no secret that Swedes love to celebrate Christmas. Despite the country's widespread secularity, Swedes flock to anything festive – and the winter season is a particular highlight with Advent, Santa Lucia, and of course Christmas itself.

Christmas markets are no rarity, with the events popping up in squares, museums, universities, and even castles throughout the country.

And the more traditional the better, which puts the Christmas Market at Gamla Linköping, the old quarter of Sweden's seventh-largest city, in a league of its own.

While the entire city is decked out in holiday style, Gamla Linköping receives special treatment. So The Local headed south – just a two-hour trip from central Stockholm – to see what all the hype was about.

Gamla Linköping, an open-air museum featuring hundreds of old buildings from the city's earlier days, is modelled upon Stockholm's Skansen – but nevertheless offers something truly unique. For one, there are no fences surrounding the area – and entrance is free.

In pictures: Scenes from the Linköping market

“Gamla Linköping is part of the city, and our politicians want it to be accessible for everyone,” Tina Karlsson, head of the Gamla Linköping open-air museum, tells The Local.

And as a result, locals and tourists alike enjoy the old city quarter year round.

“We hand-pick the vendors and check them for quality,” Karlsson explains. “All the food must be locally produced, for example.”

Linköping has been an educational and religious epicentre for centuries, as a key bishopric of Sweden since the 1100s, and a seat of cutting-edge technological innovations today.

A welcome side-effect is the city's wealth of culture. As a seasoned cultural and educational hub of Sweden, it's no wonder that it also is one of the best places to celebrate Christmas – as the day’s festivities demonstrate.

Hundreds of vendors are gathered on the unpaved, cobble-stone streets, selling everything from peppermint candy to suitcases to Christmas trees.

The air is filled with the scent of candied almonds and warm spiced glögg, and a scruffy-looking man in patched-up 19th-century clothing wanders around playing Christmas tunes on his harmonica. Hungry visitors huddle in the queue to buy strömning (herring) burgers and saffron buns.

Languages mix as shoppers haggle and children laugh, careening across the cobble stones and circling the grand tree in the square's centre.

“There’s actually been a Christmas market here, hosted by the local Lions Club, for 30 years or so,” Karlsson explains. “It's been very popular, and we decided we wanted another one, an even better one.”

The Lions Market still takes place one weekend, Karlsson says, but Gamla Linköping now has its own market as well.

Launched only five years ago, the new market already draws some 6,000 visitors each day. Attractions such as candle-making, baking traditional pepparkakor in a wood stove, and stumbling upon that unexpected Christmas gift bring audiences young and old to the market.

“It's incredible,” German tourist Katrin tells The Local as she surveys the scene. “We're from Berlin where Christmas markets are a big deal, and we were told that they don't have them here.”

Thinking first that the market encompassed a single street, Katrin and her husband Martin were amazed to discover an entire old village filled with Swedish charm.

”I thought things like this only existed in Pippi Longstocking,” Katrin exclaims with a laugh, as Martin notices forlornly that his cup of glögg is empty.

A steady stream of visitors winds its way along the alleys between the quaint red buildings, no less jolly for the lack of snow so far this year. And the graphic museum, filled with hand-printed Christmas napkins and century-old newspapers, draws a sizeable crowd of its own.

The museum maintains a functioning printing press, and Göran Hallberg, a white-haired employee clad in what looks like a 19th-century vest, presses another round of paper onto the machine as visitors look on.

”I'm just afraid the art will disappear,” he remarks, carefully inspecting the purple ink border on a sheet of paper.

Other visitors muse over the true meaning of art, cocking their heads in alarm as they examine a pile of light brown paper. The label reads ‘paper made from elk shit’.

For some the market is a novelty, an annual fair of curiosa and cheer. For others it’s a Christmas blessing on all levels, offering the chance to interact with locals and do the merriest kind of work.

At a stall selling pepparkakor-flavoured cupcakes, Josie Schroeder and her daughter Molly are doing brisk business, playing their role perfectly in this traditional Swedish scene.

But the New Zealand family moved to Linköping from the US only two years ago when Josie’s husband won a research post at the university.

It’s a common sentiment, and as the sky darkens, the mood only becomes brighter.

”Who's ready for dancing?” a stout accordion-player with a long white beard shouts out across the square. ”Gather around the tree, make two rings!”

And in resolute Swedish style, the audience complies.

“Ten for the large and five for the small, hurry, hurry, the carousel is about to go,” the Swedes sing, joined by gleeful tourists and expats who jump, clap, and twirl along with the traditional dance.

But dancing around the tree isn’t the only highlight. In classic Linköping style, with a salute to tradition but a flair for the modern, the bustling market goes out with a bang.

“Ladies and gentlemen, welcome! Please stand behind the line of candles,” a burly man in black tells the audience.

Bare-armed despite the cold, he and his female colleague proceed to set fire to batons, pitch forks, and flails, dancing and performing acrobatic tricks in time to the music.

With the fire show coming to a spectacular close, vendors begin packing up their wares and visitors trickle out from the park.

And indeed, the market is just one of many attractions taking place in the village. Christmas activities carry on all winter long, and families can even pick up their Christmas presents on December 18th from Tomten himself (provided sneaky parents drop them off in advance).

Gamla Linköping is open all year round, always free of charge, with unique activities for all ages and every season.

This article was produced by The Local and presented by Visit Linköping.