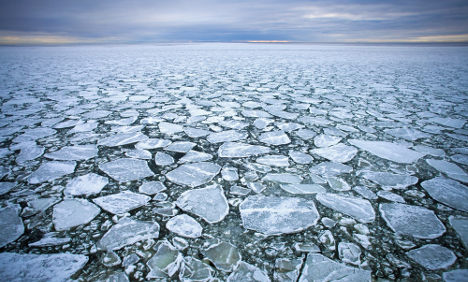 Melting ice in the Baltic sea. Photo: Shutterstock
Sweden was praised for cutting pollution from homes, with the report's authors noting that the country had shown an "outstanding outstanding emissions development in the residential sector".
Emissions in Sweden have declined by about 70 percent over the last five years.
The report, which was put together by the environmental organisations Climate Action Network Europe and Germanwatch for the UN conference looked at countries’ emissions levels, renewable energy sectors, energy efficiency and national climate policies.
Sweden was especially praised for expanding its renewable energy sector and improved its score considerably in this area.
Neighbouring Denmark recieved the highest score in the world and was held up as an example of “how industrialised countries can not only promise, but also implement effective climate protection policies.”
When ranking countries, the researchers behind the report kept the top three spots empty, saying that “no country is doing enough to prevent dangerous climate change". This meant that Denmark was technically ranked fourth, with a total score of 77.76 out of a possible 100 points.
Sweden came in fifth place with a score of 71.44. The country was ranked sixth in 2013, a spot taken by the UK this year.
Scandinavian neighbour Norway was at number 27.
France remained in 12th position, while Germany maintained its position at 22nd, despite large investments in renewable energy.
China, the world's biggest emitter, was ranked at number 45, but the report pointed to improvements in the efficiency sector and massive investments in renewable energy by the country.
Saudi Arabia was the lowest scoring country. It has the worst record on curbing the growth of its emission trends, and demonstrates a lack of investment in renewable energy.