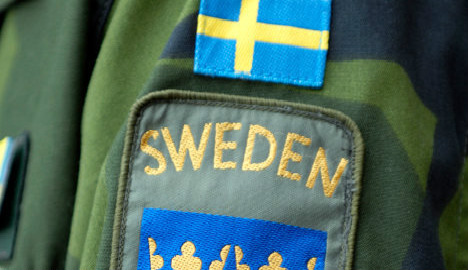 In one of Sweden's most dramatic steps since the end of the Cold War, it has brought back the option of using reservists to boost its military force, making no attempt to hide the fact that the main motivation behind the move is Russia.

Defence Minister Peter Hultqvist went on TV this week to argue the move was necessary against the backdrop of Russia's rearmament and its annexation of Crimea, as well as the Ukrainian conflict.

The decision also came just two months after Sweden got a rough wake-up call in the form of a lengthy but ultimately futile submarine hunt in the Stockholm archipelago.

Although no Swedish official ever identified the nationality of the elusive mini-sub, it was widely believed to be Russian.

In September, Sweden also lodged a protest with Moscow after the incursion of two Russian fighter planes into the Nordic country's airspace.

"There is a pattern of Russia elbowing into its neighbours, including Sweden," said Stefan Hedlund, researcher at Uppsala University's Centre for Russian and Eurasian Studies.

"It could even be happening a little more with Sweden, because maybe they see that Sweden is a country with no defence capability whatsoever," he told AFP.

Following this week's decision, the Swedish armed forces can oblige 7,500 Swedes — who received military training between 2004 and 2011 — to participate in training exercises from the end of 2015.

The measure is a sign that traditionally pacifist and unaligned Sweden, which marks two centuries of continuous peace this year, is weighing new options.

"It's fully possible that Sweden becomes a NATO member and that we reintroduce conscription and build up our defence," said Hedlund.

"But it's exactly as possible that nothing of this happens."

Much uncertainty surrounds Russia's intentions in the Baltic, but there is growing concern that the Kremlin could seek to push the envelope in the region the same way it did in Ukraine.

Poland's defence minister Tomasz Siemoniak warned Thursday that in recent days there had been "unprecedented Russian activity from its Baltic fleet to flights over the Baltic Sea", and on Friday his colleague in Estonia said a Russian plane had violated its airspace. Amid the growing apprehension in the region, Sweden has sharpened its rhetoric, with new Prime Minister Stefan Löfven saying after the submarine hunt that the Nordic country would defend its "territorial integrity with all available means."

Those means are shrinking — since the end of military service in 2010 the Swedish armed forces have struggled to attract new recruits.

To really make a difference, more is needed than calling up reservists, according to Hedlund.

"This is just a political manoeuvre from the politicians, because they understand that they've led a disastrous policy over the last 10 years, in which they've dismantled Sweden's defence," he said.

"No matter what they do today, it's going to take 10 to 15 years to build up a defence capable of protecting Sweden."

Sweden's military has not beaten around the bush about the consequences of a decade of cutbacks, with the commander-in-chief having gone on record as saying that he would only be able to defend the nation against a foreign invader "for a week".

Jacob Westberg, researcher at the Swedish National Defence College, argued that there is no reason to fear an immediate Russian challenge of the US or NATO.

"But in the long run, if this asymmetric rearmament trend continues, with democratic Western Europe cutting defence budgets and Russian defence investments growing, the outlook in 10 or 15 years looks worrisome," he said.

Sweden's nearly 10 million people are concerned, and close to half want a stronger defence.

According to a survey by polling institute Ipsos for the daily Dagens Nyheter earlier this year, 45 percent of Swedes think that defence spending should increase, while 36 percent think it should stay the same, and only 10 percent want it to shrink.