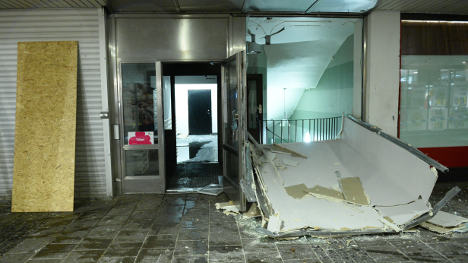 Damage from the explosion. Photo: TT

The explosion went off late on Wednesday night, ripping the walls and doors off a building in downtown Rinkeby a suburb in north-west Stockholm.

No one was injured, but local police said the damage was "extensive", reported the TT news agency.

Police have classified the incident as arson and attempted devastation endangering the public (allmänfarlig ödeläggelse).

Officers are yet to arrest anyone in connection with the blast. It also remains unknown what caused the explosion, but a forensics team had been deployed at the scene on Thursday morning. Police and fire fighters were called to the scene. Photo: TT