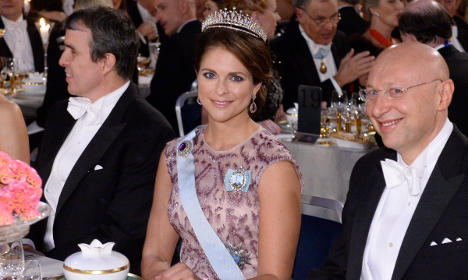 The Royal Court made the announcement on Friday afternoon, stating that it was "better to be proactive than to allow speculation". The baby will be the second for the royal pair after Princess Leonore was born on February 20th.

The baby is expected in summer next year.

"We are very happy and look forward to welcoming a new member to our family," the couple said in a statement.

The young prince or princess will be the sixth in line to the Swedish throne, and will arrive in the world at a busy time for Sweden's royals, explained the Royal Court's spokeswoman Margareta Thorgren.

"We don't want to go out with a specific date or time yet,"  told the TT news agency."But there will be a lot of fun in store for the royal family this summer – starting with a wedding in June and then the birth of a child."

The Princess, her husband, and their first child Leonore at her baptism this year. Photo: TT

Roger Lundgren, royal expert and editor of Kungliga Magazine, said the announcement made for some good news for royal fans.
"But I definitely don't think it will overshadow Prince Carl Philip's wedding in June," he told The Local.
"If it was Victoria that was having a child, perhaps it could have been enough to overshadow a royal wedding, but not Madeleine. This prince or princess will be rather low in line of concession to the throne."
He added that it wasn't uncommon for Swedes or Royal Swedes to have children born so close together.

Princess Madeleine gave birth to Princess Leonore in New York earlier this year and the new addition to the Royal Family was baptized in June.

Princess Madeleine and her American husband were married in Stockholm on June 8th, 2013.