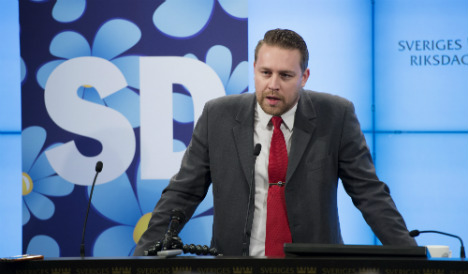 In the wake of the announcement, dubbed the 'December agreement' on Saturday morning, Mattias Karlsson has reacted with fury and said he planned to call for a vote of no confidence in the current Prime Minister.

The 'December agreement' was thrashed out over the Christmas period and effectively means a minority government can rule without obstruction.

Both the ruling Social Democrat-Green coalition as well as Sweden's centre-right Alliance parties pushed through the arrangement after the Sweden Democrats sank the government's budget in December and triggered a political crisis.

Only the Left Party and the Sweden Democrats were absent from the press conference in which the announcement was made.

In a press statement the Left party leader Jonas Sjöstedt said he welcomed the announcement and pledged to co-operate with the government and influence policies going forward.

But Karlsson, the acting leader for the nationalist anti-immigration Sweden Democrats said:

"I think it's startling that they go against the fundamental principles of democracy. What it's done is introduce a set of rules where a minority can control a majority".

He added: "The Alliance has practically given up its role as the opposition. With that the Sweden Democrats are now the leading opposition party."

Karlsson, who is filling in for Jimmie Åkesson who is on sick leave, said he intends to call for a vote of no-confidence in Stefan Löfven as a matter of urgency. In last September's general election the Sweden Democrats earned 13 percent of the vote, with recent opinion polls suggesting they were set to increase that by several percentage points in the now abandoned 2015 snap election.

He continued: "It is clear that they are attacking us. Now there are six parties in government and one opposition party."

Karlsson said he would be speaking further with Jimmie Åkesson to frame the party's strategy in the aftermath of the canned election.

Had the election gone ahead as planned on March 22nd it would have been the first snap election in Sweden in more than half a century.

Stefan Löfven's centre-left coalition made up of the Social Democrats and the Green Party was only elected in September, after Fredrik Reinfeldt's centre-right government slipped out of power, having led the country between 2006 and 2014.

All of the major parties have consistently stated that they are not willing to enter into any political arrangements with the Sweden Democrats.