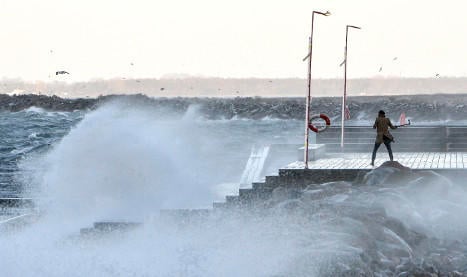 Halland, Öland and Gotland were told to prepare for the worst weather, while a class one warning was in place in Götaland and southern Svealand.

“This is a serious situation,” Eva Strandberg, a meteorologist at Sweden’s weather forecast agency SMHI told the TT news agency.

She said that people in areas where a class two warning is in place should be prepared for major disruptions to transport and the possibility of trees falling across roads.

“The forecast does not point towards the storm turning into a hurricane, but that could change change,” she added.

By lunchtime on Friday hundreds of homes were without electricity around Östergötland and Västra Götaland and elsewhere on the west coast.

Stena ferry services between Frederikshaven and Oslo were cancelled and trains between Uddevalla and Strömstad, between Borås and Varberg and across eastern Småland were subject to cancellations or delays, with passengers advised to check services online before setting off.

In Pictures: Take a closer look at Storm Svea

In Olofström in southern Sweden a wind turbine started shaking on Friday afternoon, with emergency services and engineers called to the scene to secure it amid fears it could be blown down.

"It's very rare that these things happen and we wanted to make sure that no one was hurt as parts of the wind turbine began to loosen," Jonas Petersson, spokesperson for the Fire Service in the region told Swedish news network SVT.

Social media users in the west and south of the country have been busy sharing photos of the wild weather.

Time to brave #Svea, mother of all Swedes. She has taken the shape of a powerful winter storm hitting our west coast. Going out in the wind.

On the plus side though, we can now see the blue sky, well somewhat 🙂 #svea pic.twitter.com/Zm6yrpmTWb

Looking at the sea when the storm passes by #Svea #beautyful pic.twitter.com/dGXDBYpS1t

They said that it's strength was linked to mild weather during the autumn.

"It has paved the way for strong January storms. The storms will gain power because of warm energy from the sea," Eva Strandberg told TT.