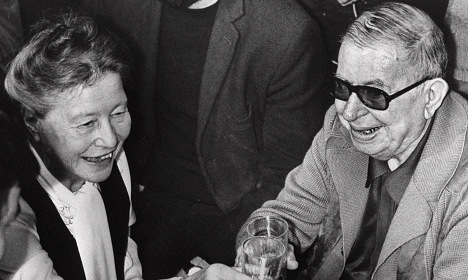 Jean Paul Sartre in 1974. Photo: TT
Sartre's letter arrived nearly a month after he had been picked as the top choice by the Nobel Committee, the daily Svenska Dagbladet reported, based on archive material made available at the end of Sweden's customary 50-year period of secrecy for certain documents.
The report throws light on the sequence of events leading to Sartre's decision to become the only person to willingly turn down the world's most prestigious literary prize.
Sartre explained that he had "always declined official honours", including the French Legion of Honour in 1945, as it would limit his independence and institutionalise him.
It had already been widely speculated that Sartre's letter asking not to be considered for the award had been too late, and the letter provides historical evidence to back this up.
Sartre, who had been mentioned as a likely candidate for several years, sent his letter to the Nobel Foundation on October 14th, 1964, saying he would not be able to accept the prize "either in 1964 or in the future", according to the paper.
However, the Nobel Committee for Literature had agreed on Sartre as the top candidate on September 17th, the paper said.
In principle the decision on the year's winner had already been taken, Sartre was told in a reply from the Swedish Academy, which awards the prize.
Consequently, when the Swedish Academy met on October 22nd, 1964, its 18 members decided to follow the committee's recommendations and award the prize to Sartre – who, good as his word, refused it.
Had Sartre's letter arrived before the committee met in mid-September, it is likely that the award would have gone to someone else, Svenska Dagbladet reported.
Some of the committee's members were ambivalent about Sartre's literary merits, and a letter from the famous Frenchman would have given them an additional argument against him, the paper said.
There is only one known case of a Nobel being refused in advance: Swedish poet Erik Axel Karlfeldt succeeded in persuading the members of the jury not to award it to him in 1919, but he had the unfair advantage of being a member of the jury himself.
He later won the prize posthumously in 1931 at a time when death was not a barrier to becoming a laureate.
In 1958, Soviet writer Boris Pasternak was awarded the literature prize for his novel Doctor Zhivago and other works, but the Kremlin forced him to decline the honour.
The only other laureate to willingly refuse the Nobel was Vietnamese prime minister Le Duc Tho, who did not want to share the 1973 Nobel Peace Prize with US Secretary of State Henry Kissinger for negotiating the end of the Vietnam War.