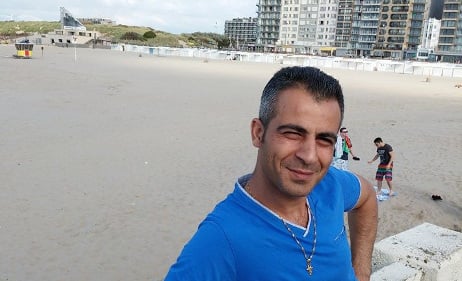 Rabi Hanna on holiday this summer. Photo: Private
Rabi Hanna left Syria in his twenties and spent five years working in IT in Africa – earning good money and regularly travelling to Europe to visit friends and family.
But during a Christmas break to Stockholm in 2012, the company he had been based at in Ghana ran into trouble and phoned him to cancel his contract, just as the war was intensifying in his home country.
"I couldn't go back to Ghana without a job and I couldn't go home to Syria because of the war,” Rabi explains.
"One minute I was on holiday in Sweden, the next, I was stranded here. It was really horrible."
Rabi decided to seek asylum in Sweden and had his application accepted four months later.
"It didn't take too long but it wasn't an easy time. Getting an apartment in Stockholm was tricky without a job and it was hard to get a job without knowing Swedish. I kept having to move around and this is an expensive place to live if you are not working."
Despite more than a decade of experience in the IT world, Rabi accepted an unpaid internship as his first step into the Swedish economy.
"I was lucky, I made a great, kind contact who helped me with my CV and with applications and then I managed to get a good job in my industry. Now I am in my second job in Sweden." Rabi enjoys living in Sweden, but misses the Syrian sun. Photo: Private
Rabi's current role is Chief Technology Officer at Miss Group, a new Swedish start-up specialising in web services including domain registration, hosting, broking and management. He is the only non-Swede at the company.
"I speak English with my colleagues at work, although I am learning Swedish," he says.
"It has taken me longer than I had hoped to pick up the language. It is difficult to find the time when you are working so hard".
While Rabi enjoys socialising with other international expats in Sweden, he says he is determined to improve his language skills in order to integrate further into Swedish society.
"You can communicate with people wherever you go, because most people speak English. But you have to speak Swedish to really settle here," he argues.
"You need Swedish for your social life."
Rabi's home town in Syria, Kamishli, has managed to escape the bloodshed felt in other parts of the country, but he saved up to help his parents relocate over the border to Lebanon in 2014 and hopes that other members of his family may eventually join him in Sweden.
"I just want to know that they are somewhere safe," he says.
As for Sweden's approach to taking in Syrian migrants, he is a strong supporter of what he describes as "an efficient system".
"It is not easy for everyone who moves to Sweden. But I like the people here. They want to help others. I like the way the system works. People follow the rules".