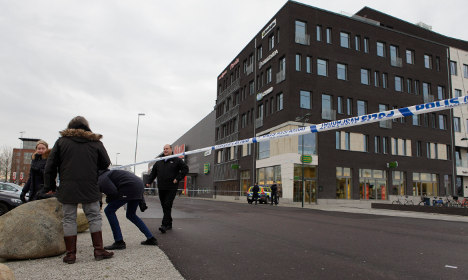 Police cordoned off the area after the powder was discovered. Photo: TT
The envelope was first sent to a branch of the Swedish Tax Agency (Skatteverket) and then on to the debt agency (Kronofogden). Police were called in and the area was cordoned off on Monday.
A spokesperson at the tax office, Anette Backlund, said that all 20 people at both agencies who came in contact with the envelope were isolated and decontaminated.
"After they were at the hospital for several hours they have all been allowed to go home," she told the TT news agency.
Four police officers were also decontaminated.
The suspicious powder was sent to a laboratory in Stockholm's Solna for analysis on Monday night, with experts ruling on Tuesday that there was no anthrax present.
The agencies will now review how they handle similar situations in the future.