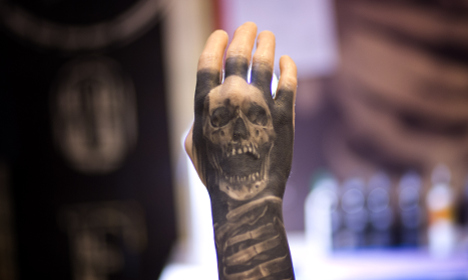 A hand tattoo (but not this one) led to an arrest. Photo: TT

The 22-year-old is now facing charges for a gas station robbery that occurred back in late November 2013, according to local media reports.

The robbery was captured by the gas station’s security cameras, revealing a tattoo on the back of the robber's hand.

Local police had experienced difficulties identifying any suspects for the crime, in part because the robber wore a ski mask.

But a local police officer investigating a separate case involving the same man realised he shared the same tattoo as the one caught on camera during the gas station robbery.

The suspected robber was brought in for questioning, but denied all links to the gas station robbery, claiming a separate individual must have the same tattoo and saying that he obtained his tattoo after the date of the robbery.

But he later admitted carrying out the crime after police showed him photos of his tattoo that he had uploaded to his Facebook page – prior to the date of the robbery.

The 22-year-old admitted to robbing the gas station in order to pay a debt owed to a drug dealer.

The Malmö-based man said he thought it would be easier to get away with the robbery from a town other than his own.

Tomelilla, about 70 km west of Malmö is a small town of only about 7,000 residents.