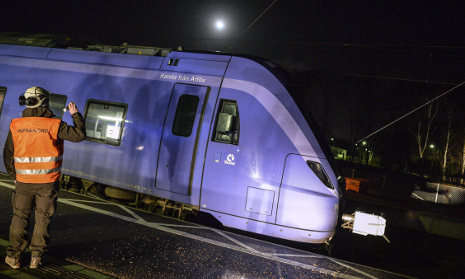 Train services in west Sweden have been delayed. Photo: TT

Energy companies admitted that around 5500 people in west Götaland were without electricity on Monday morning, with 4000 affected in northern Halland.

A new school being built in Färjestaden on Öland collapsed in the storm on Sunday night, according to local radio station P4 Kalmar.

“The first walls were built before the weekend, but Egon destroyed them like a house of cards,” one journalist at the station reported.

There were also reports of roofs blowing off churches and the Swedish Employment Service’s office in Småland.

About 55 people were evacuated from their homes in Denmark after Egon and Dagmar, the storm which preceded it, pushed sea levels in parts of the country to the highest levels ever recorded.