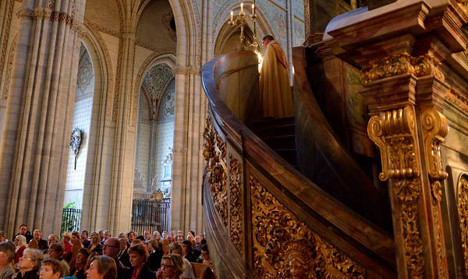 The Swedish Church in Paris. Photo: Svenska Kyrkan
The vicar of the church,Tanja Kamensky, said that the broadcast was both a chance for Swedes to pay tribute to the victims of the attack and to allow the Swedish Church in Paris to thank Swedes for the support they have offered to France since the deadly shootings.
"It's been a tumultuous few days and many are very shaken. The idea is to send a greeting from here, where we want to highlight the nice feeling we got after the magnificent manifestation march on Sunday," she wrote in a statement.
The service, which will be entitled With Love from Paris will be broadcast on Sunday February 1st and will be available to watch via Swedish newspaper Aftonbladet's website.
Swedish actor and comedian Özz Nujen is scheduled to speak, alongside Helle Klein, a priest and contributor to Swedish publication Dagens Arbete.
There will also be performances from Swedish artists living in the French capital, including cellist Mimi Sunnerstam.
Sweden is one of the most secular countries in Europe, but the Swedish church has rallied since last week's terror attack in Paris, with Antje Jackelén, Sweden's first female Archibishop among the religious leaders around the world who commented on the shootings.
"It is primarily a tragedy for the victims and their relatives, but it is also an attack on our open society and free speech," she said on Friday.
"Throughout Europe, including its religious communities…we must fight the extremist ideology that fuelled the attack. We must also resist the false guilt that occurs when this ideology is confused with religion," she added.
"Just as the 2011 Norway attacks could be justified on Christian grounds, so can the attacks in France in 2015 be made 'Muslim'. As we express our disgust over what happened, we will do it while also considering all the victims of terrorism around the world whose deaths do not create such large headlines. Ultimately, every violent attack on our human dignity presents a tear in the fabric that unites humanity."
IN PICTURES: Sweden reacts to Paris terror attack
Sweden has held a number of events to remember the victims of the Charlie Hebdo attack and the violence that followed it.
On Sunday around three thousand people turned out to a Je suis Charlie-themed rally in Stockholm, said to be the largest protest that the capital has seen during winter.
Hours after the shootings, the city's French community lit candles outside the French embassy in Stockholm.
Sweden's Home Affairs Minister told The Local on Tuesday that he was worried that the attacks in France could lead to rising Islamophobia in Sweden, where there have been a number of attacks on mosques since Christmas, including some after the Charlie Hebdo shootings.
"It is clear that there are dark forces now trying to link Charlie Hebdo to their own agenda and trying to raise tensions," he said.

PARTNER CONTENT
Would your career benefit from an EMBA?

PARTNER CONTENT
The future of work: How can we prepare our children for the world of 2032?
Url copied to clipboard!