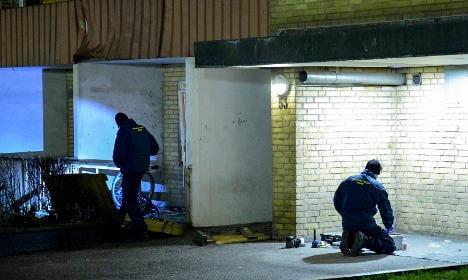 The 45-year-old was arrested for plotting to carry out the bombing, which happened on December 24th.

Two men, aged 19 and 39 years old, and a 15-year-old boy had previously been arrested in December for serious public endangerment.

Two prosecutors in the case, Jenny Lindell and Neela Frisell, confirmed to news agency TT that another person has been arrested for the crime of conspiracy.

The woman was taken in for questioning on Wednesday, it has emerged.

The attacks were directed against the premises of a property company.

No one was reported to be injured in the attack although the property was damaged.

“A window has been completely destroyed. The frame is just hanging off. Parts of it are ten to fifteen metres away,” freelance photographer Karsten Petersen said at the time.

The blast was the fourth in the area that month. The week before, there were two explosions at the company’s premises and also further blast targeted a car parked a few hundred metres away.

Police said after the attacks that they suspected that the blasts were due to a dispute between some tenants and the property owner.

"We can't get focus entirely on this, but we think there are some individuals who are dissatisfied with some societal function and then they fight back in this way,” Ewa-Gun Westford said previously.