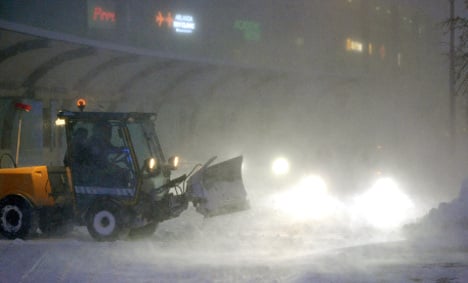 A snow plough in Stockholm. Photo: TT
The idea is that both genders will get equal protection from slipping on ice in the city. Women are currently more likely to have accidents during the winter months.
"Statistics show that more pedestrians and bikers get hurt than motorists. Therefore it’s important to try to prevent these groups from tripping and injuring themselves. That is why we will prioritize the clearing and treatment of walkways and bike lanes in the future," deputy mayor and head of Stockholm's traffic division Daniel Helldén told The Local.
"Stockholm should be accessible to everyone and slippery streets should not be allowed to discourage people from leaving their homes. This issue affects women considerably, as increasingly it is women who walk and cycle more than men," he explained.
Temperatures have dropped below -5C most nights in Stockholm this week, with snow that fell over the weekend forming dangerously icy transparent patches on roads and pavements around the city.
There were several road accidents on Friday morning, including one involving a bus carrying school children, which flipped over to the west of the city.
The 'gender equal' snow plough strategy has been mooted for some time and although the city officially announced it was finally happening on Friday, it isn't set to come into force in Stockholm until around November. City officials say they still need time to refine and implement the policy.
A similar strategy has already been adopted in Karlskoga in central Sweden where the local government started shifting the priorities of its snow removal practices in 2012, to put more emphasis on areas often frequented by women. The move didn't incur any extra cost and has produced promising results.
Under the municipality's old system, key roads were cleared first, followed by areas where men typically worked such as construction areas, and lastly areas used by pedestrians and cyclists.
After a review, Karlskoga prioritized day care centres, where parents usually go first in the morning, followed by areas around the largest work places regardless of gender, followed by schools, and then the main roads. As a result, the municipality noted that it had become more accessible for everyone during and after snowfall, particularly children.
Another trial is taking place in Huddinge, which is just outside Stockholm city centre.