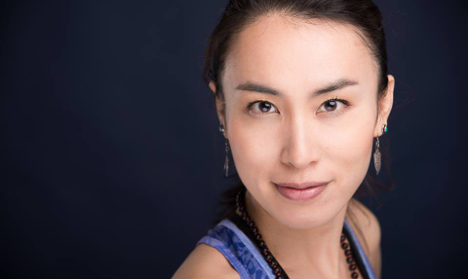 Ai Hiroshima Hjelm. Photo: Vincent Palma
Tokyo-born Ai Hiroshima Hjelm first fell in love with Sweden when she was an exchange student in Uppsala a decade ago. Impressed by the country's passion for nature, fashion and design, she vowed to return one day.
But in the meantime she ended up indulging her love for the Nordic nation by taking a job at Asia's first Ikea store in her home city, Tokyo.
It was there that she met her husband, a Swedish journalist who was sent on an assignment to Japan to write about the expansion of the flatpack furniture empire.
"There was some immediate chemistry," smiles Hjelm.
"We ended up having a long distance relationship for a year – which wasn’t so easy – and then I moved to Stockholm.”
Hjelm started out hoping for a career in the fashion industry, but despite completing a masters course in fashion and having a keen eye for new trends, she ended up working in an office for four years.
"My job had nothing to do with my course and it was pretty intense. I felt like I was stuck indoors all the time, which isn't actually very Swedish," she tells The Local.
“I have always loved yoga, so I thought about becoming an instructor instead."
“I was fed up of sitting at my desk and working long hours – which is unusual in Sweden – so I decided to learn from the Swedes and focus on getting more balance in my life,” she adds.

Ai showing off her yoga moves. Photo: Vincent Palma
Hjelm now holds weekly yoga classes at several locations in the Swedish capital, through her company A³.
The lessons are in English and attract a mixed crowd of expats, immigrants and locals.
A keen dancer, she is also gathering a group together to put on a contemporary dance performance in Stockholm in the summer.
The event will be part-choreographed, also including improvisation and experimentation.
Another Japanese immigrant to Sweden, Sayuri Hayashi, has composed the music for the event alongside Swedish musician Hannes Egnel. The duo call themselves Krims-Krams, which means 'knickknacks' in Swedish.
Hjelm says she feels "very integrated" into Swedish life and that she hopes that other immigrants can feel inspired by her experience.
"I feel very welcomed as an immigrant in Sweden. People are very polite, have a great understanding of other cultures, and moreover, people are more interested in 'me' and not so much where I come from," she says.
“Stockholm is my home now and I hope my classes and workshops can help others to meet new people, express themselves and relax.”