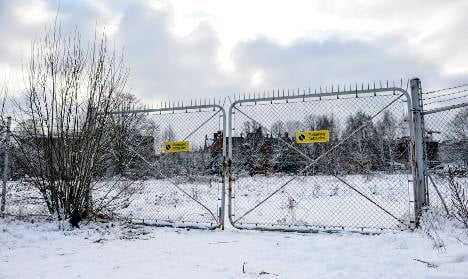 The fence in Norrköping where the woman was found hanging. Photo: TT
Police are investigating the gruesome death of a woman in Norrköping, who was discovered hanging upside down from a fence, attached by the calf of her leg.
Officers noted that her body was partially covered with snow, suggesting she had been dangling there since sometime on Wednesday night.
The Norrköping woman who is said to have been in her 40s was discovered by a parking attendant, who contacted police at about 3pm on Thursday, with full details emerging in the Swedish media a day later.
According to Norrköping police, the woman was most likely trying to climb the two-metre high fence, but got stuck and was pierced by a sharp spike at the top of the fence.
Just 50 metres from where the woman was discovered was a shorter fence without spikes, which would most likely have allowed her to climb over without getting hurt.
But police have said that she may not have seen that opportunity in the dark.
"She may have suffered an acute injury after she tried to cross," Anders Selevik from Norrköping's police told Dagens Nyheter on Friday.
"Or she may have been hanging too long, and died from lack of blood circulation," he added.
Police have also not ruled out the possibility that she may have frozen to death.
"Anything is possible at present."
There are no houses near the location where the woman was found hanging, and the woman was partly obscured by a tree, which police say could explain why no one alerted police earlier.
"She came to the fence alone, as we were able to follow the footprints in the snow," Selevik said, adding he had never seen anything like it.
"This is very unusual. It's very tragic and unfortunate."
The region's police force is set to carry out a full autopsy on the body in the coming days.