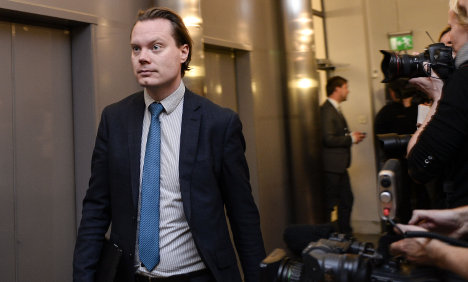 Sweden Democrat Martin Kinnunen has been questioned by police. Photo: TT
Martin Kinnunen, who is a member of parliament based in Gothenburg and also a press spokesman for the Sweden Democrats is accused of 'missing out' several million kronor when signing off details of the media company's accounts which were submitted to the Swedish Tax Authority.
After Swedish television news network TV4 broke the story on Tuesday, he issued a statement saying: "I am innocent, I deny these crimes".
The nationalist politician acknowledged that he was "responsible for the accounting we provide to the tax agency" but stated that all financial administration had been managed by an external consultant.
According to TV4, five others linked to the claims were questioned by police, with several homes raided over the last fortnight in connection with the allegations.
But Martin Kinnunen told the TT news agency he did not believe that any other party members were being investigated.
"I know it's only me who is suspected," he said.
Police speaking to TT suggested that four of those who had been questioned had been called as witnesses rather than suspects.
How the Sweden Democrats went mainstream
The Sweden Democrats are the third largest party in Sweden and polled almost 13 percent of the vote in the country's last general election in September 2014.
TV4's investigation has revealed that in May 2014, the Swedish Tax Authority ordered the media company owned by the party, known as 'Samtid och framtid', to pay a 182,550 kronor penalty fee, after the firm had neglected to declare 3.6 million kronor in turnover as well as 912,000 kronor in VAT.
Kinnunen confirmed the figures to the broadcaster but stressed that he had not had "any desire to do wrong" or to profit from the error.
He is now understood to be taking time out from his parliamentary duties as police investigate the case further.
Serious tax fraud in Sweden can result in up to six years in jail.