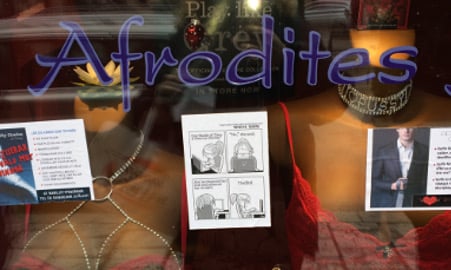 When sales assistant Anna Sundtröm arrived at the store, she immediately noticed that the window had been covered with flyers criticizing the shop for promoting violent sex by selling official merchandise linked to the movie.

They described the film as being "manipulating", "controlling" and promoting isolation and torture.

“I think it’s extremely insulting and unfair to be labeled as an anti-feminist store that promotes violent sex. My mother and I run this store together and have never been advocates of non-consensual sex. Instead we have focused on celebrating and embracing women’s sexuality," she told The Local.

The flyers were understood to have been put up by anti-pornography feminist campaigners Kvinnofronten, although the group could not be reached for comment on Thursday. One of the flyers. Photo: The Local
Afrodites Apotek, which is one of Stockholm’s most famous sex shops, has a reputation for selling sex toys to a wide variety of men and women of various sexual orientations. According to Sundröm, customers can be aged between 15 and 92.
She also says that some of her clients are referred to the store by gynecologists seeking to help them with "intimate problems".
“I really don't understand what this group wanted to achieve by doing this. They are the ones who are violating women and putting a stigma on women’s sexual desires and needs. They should be celebrating the fact that this store is run by two women who want to help other women explore their sexuality and sexual fantasies," she told The Local.
Fifty Shades of Grey is currently the most viewed film in Sweden. Based on the novel by British author E.L James, it charts the story of a university literature graduate and a young successful businessman, who asks her to participate in domination and submission games, bondage and other extreme sexual practices.
The movie hit the headlines in neighbouring Denmark this week for a very different reason after a man was caught on film at a screening and then appeared to try and hide from the camera.