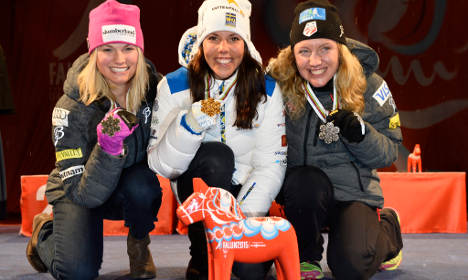 Swedish star Charlotte Kalla impressively outclassed her competition in the 10km individual ladies' freestyle race on Tuesday. But while Sweden was busy cheering its golden girl, the US exploded in a fanfare of praise for the two runners-up after what spelled an historic result for the team.

Jessie Diggins and Caitlin Gregg braved the falling snow in Falun in central Sweden to finish second and third at the FIS Nordic World Ski Championships as the first American women to win medals in a distance event at the Nordic world championships. And it did not take long for their US fans to react.

Sweden & the U.S. in top 3 today in #Falun2015! Congrats on the gold medal #CharlotteKalla! http://t.co/3kwWy9heyg pic.twitter.com/oRlNxdRbRr

Beyond stoked to see @jessdiggs and @CaitlinGregg on the podium! Cheers to our @USSA_Nordic teammates! This is absolutely incredible!

p { margin-bottom: 0.25cm; line-height: 120%; }a:link { } Perhaps recalling their Nordic heritage – both skiers are from Minnesota, where tens of thousands of Swedes emigrated in the 19th century – Diggins and Gregg seemed unstoppable to everyone but Kalla.

It's finally sinking in…AND I'M FREAKING OUT!!! Thanks so much for all the cheering and to the team that made this amazing day possible!

Diggins herself told Minnesota paper StarTribune after the event: "It came as the best surprise ever to end the day with a silver medal at the world championships and be able to make history alongside Caitlin. It's just been really, really cool."

On Wednesday afternoon, one of Sweden's other big stars, Johan Olsson, won gold in the men's 15km freestyle race.