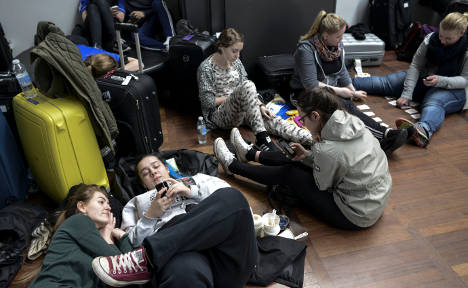 Travellers delayed in Copenhagen over the weekend. Photo: TT
SAS staff in Copenhagen were told they had until midday to either resume work or be fired, as their work stoppage entered its fourth day.
At around 11am the cabin crew said they would begin working again.
Jakob Esposito, a spokesman for the striking workers, said that the employees would return to work and SAS flights would resume operations shortly after noon on Monday.
Although the staff will return to work, Esposito warned that the conflict was far from over.
“I am quite convinced that this won’t stop here. Next, we can carry out a legal conflict in order to get a new bargaining agreement with Cimber, and we will have [the support of] a majority of employees,” he told Danish public broadcaster DR.
The staff walkout led to dozens of cancelled and delayed flights in and out of the Danish capital over the weekend, a key hub for travellers moving on to Malmö and other cities in southern Sweden.
At least one flight to and from Stockholm was expected to be affected by further disruption on Monday. Passengers were told to expect text messages if their services have been cancelled or delayed.
"There’s a wild cat strike among some of the Danish cabin crew in Copenhagen," said the statement in English on the company's website on Monday morning.
"It affects traffic massively in and out of Copenhagen and several cancellations and delays are expected for Monday 2nd of March. SAS is doing what’s in our power to get the Union to encourage the members to get back to work."
“The illegal work stoppage has negative societal and economic consequences. Therefore it is necessary that SAS, as a responsible company, takes further steps to normalize operations for the sake of our customers and employees,” added an SAS press release on Monday.
On Sunday, the Danish Labour Court (Arbejdsretten) ruled that the roughly 140 striking personnel represented by the Cabin Attendants Union (CAU) needed to return to work. CAU defied the order and SAS cancelled 40 flights on Sunday.
By 8am on Monday, 51 additional flights had been cancelled in and out of Copenhagen Airport.
Cabin staff were striking over SAS’s plans to move them over to the collective bargaining agreement of Cimber airlines, which SAS purchased in December. Cimber’s bargaining agreement is less generous than that of SAS.
In its press release, SAS added that striking workers were threatening fellow employees who have remained on the job.
Fellow Scandinavian airline Norwegian is also experiencing dissent from workers this week.
Around 70 of its staff in Norway went on strike on Saturday, after more than three months of fruitless negotiations over pay and conditions.
One flight to and from Stockholm was delayed early on Monday morning although passengers were booked on to a later service. The rest of the delays and cancellation were to domestic services.
The Swedish Pilot’s Union has pledged to mount a sympathy strike on March 4th if no agreement is reached before then and has said that the strike action could end up involving as many as 700 pilots across Sweden, Norway and Denmark.
"We are doing everything we can to minimize cancellations," a press spokesperson for the airline, Charlotte Holmberg Jacobsson told the TT newswire on Monday.
She said that staff normally based in Finland and Spain could be brought in if the strike expanded.
Over the weekend, Norwegian CEO Bjørn Kjos issued this statement: “We would like to apologise to our passengers for the uncertainty this situation has caused. Our goal has always been to avoid a strike. Our wish has been to work out a common platform that takes into account the tough competition in the industry, secure everyone’s jobs and build a strong company for the future. We will now do everything we can to ensure that all our passengers are taken care of in the best possible way.”
Passengers were advised to check the firm's website for the latest information.