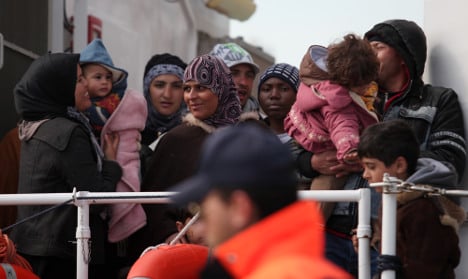 Refugees arriving in Italy in March 2015. Photo: TT
As the Syrian war enters its fifth year, the UN’s refugee agency is calling for a new approach in Europe to support some of the 3.9 million people who have fled the conflict.
Under the UNHCR’s new proposals, presented to the EU, some Syrians would helped to from their arrival points in southern Europe to elsewhere on the continent, in order to stop Mediterranean countries being overwhelmed by refugees and asylum seekers making illegal, often unsafe journeys to other parts of Europe, including Sweden and Germany.
“The situation in the Mediterranean is such that we think that it’s urgent to come with a fresh and bold look at what is happening, and to look at proposals to deal with this situation,” UNHCR spokesperson William Spindler told The Local Italy.
Last year over 170,000 people arrived by boat to Italy, with Syrians making up the largest group. UN figures however show that only a minority seek asylum within Italy, with most Syrians travelling across European borders illegally to settle elsewhere.
In Sweden, 50,235 people have sought asylum in the past three years. Sweden currently takes in more refugees per capita than any other European country and the Swedish government has pledged 1,200 resettlement places.
Recognizing this trend, Spindler said legal routes between southern and northern European countries must be opened up. The UN is calling for an agreement which would stop Syrians having to smuggle themselves across European borders, without altering the EU’s Dublin regulation on asylum seekers.
“We are not going as far as saying scrap Dublin or change the regulation, it was done for a reason. What we’re saying is let’s find a way of applying Dublin in such a way as it doesn’t cause this situation,” said Spindler. Refugees approaching Sicily in March 2015. Photo: TT
The move follows similar calls from Swedish politicians including Liberal Party MEP Cecilia Wikström who last week wrote a debate article published on The Local Sweden.
"Five of the [EU] Member States receive 70 percent of the asylum seekers – Sweden, Germany, UK, Italy and France – while, for example, Estonia only received 10 people, Croatia 35 and Latvia 35 in 2013. It is time for a European quota system that distributes asylum seekers between Member States, based on population, GNP and other relevant factors," she said.
The UNHCR would not disclose the numbers of refugees included in its new proposal, referring only to a “more equitable distribution of refugees”, nor when an agreement could be reached. But with no sign of an end to the Syrian conflict, Spindler said the issue needed to be addressed as a matter of urgency.
“The attitude now is to shift the problem to somewhere else. We can’t continue doing this; we have to show more solidarity within Europe, and between Europe and other countries receiving most refugees,” he said.
In addition to the relocation scheme, the UNHCR is also pushing the EU to come up with a “much more robust search and rescue operation in the Mediterranean”. Italy last year ended its Mare Nostrum sea mission, which cost an estimated €9 million each month, replaced by the EU’s significantly smaller Triton operation.
“It’s unacceptable that thousands of people drown finding safety in Europe,” said Spindler, with hundreds of deaths already reported this year.
“Some countries – Greece, Bulgaria, Italy – are finding it really difficult to cope with this situation. Many of these asylum seekers continue their journey but still the cost of rescue is on a few countries,” he added.
The worsening security situation in Libya, from where the majority of migrants boats to Italy depart, has put even greater pressure on authorities in southern Europe.
The head of the EU’s border agency last week said that up to a million people were poised to flee Libya to Europe. "In 2015 we must be prepared to face a much more difficult situation than last year," Frontex chief Fabrice Leggeri said.