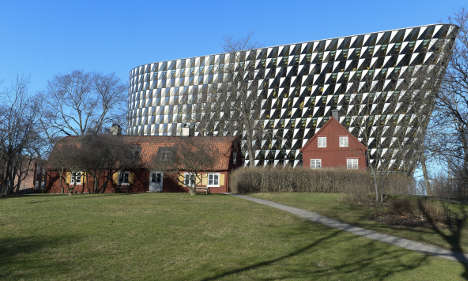 A lecture hall at Karolinska. Photo: TT
Karolinska, which is Sweden's leading medical university and a member of the 22-strong League of European Research Universities climbed up the table after previously being ranked among the top 60 higher education institutions in 2014.
Having celebrated its 200th university in 2010, it consists of two campuses dedicated to research, clinical medicine and pharmacology, with a faculty of more than 2,300 serving around 8,000 undergraduate and postgraduate students.
Uppsala University, which frequently appears in the league table but missed out on a place last year regained its spot in the top 100.
Situated north of Stockholm, it is the oldest university in the Nordic countries, founded in 1477. 20,000 students currently study there, and it has a strong reputation for arts and humanities as well as medicine, science and technology.
The University of Lund, which was also ranked among the 100 most prestigious higher education institutions in 2013 and 2012, failed to make this year's rankings, having also lost out in 2014.
Over 10,000 academics from 142 countries were polled for the study, which was topped by Harvard in the US.
The UK snagged positions two and three respectively with Cambridge and Oxford, followed by Massachusetts Institute of Technology and Stanford University.
Funded by British magazine Times Higher Education, the study is the largest of its kind based on the opinions of global academics and aims to provide "a definitive list of the top 100 most powerful university brands".
Elsewhere in Europe, France was celebrating after boasting five institutions in the world's top 100 – up from two in 2014.
Berlin-based institutions also bounded up the table, while Ludwig Maximilian University in Munich jumped almost 10 places, from 46th to 35th.
"A university’s global academic reputation is vital – it not only influences investments and funding decisions, but more importantly, it helps a university to develop and nurture its single greatest asset: its student and academic talent," Phil Baty, editor of Times Higher Education Rankings said in a statement.
Url copied to clipboard!