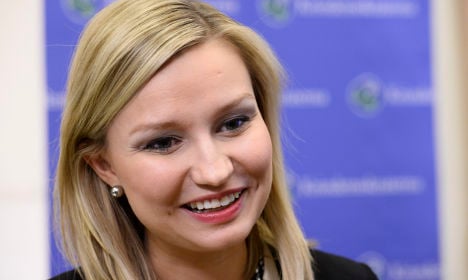 Ebba Busch Thor who is set to lead the Christian Democrats. Photo: TT
The politician, who is currently a councillor in the student city Uppsala, north of Stockholm, is set to take over from Göran Hägglund, who was Minister for Health and Social Affairs in the previous coalition government, led by Fredrik Reinfeldt.
He resigned in January after stating that "eleven years as party leader takes its toll".
At a press conference to announce her nomination, Busch Thor told Swedish media: "I am extremely happy and grateful for the confidence that Christian Democrat members and the nomination committee have given me". Göran Hägglund announced his resignation in January. Photo: TT
Bush Thor added that she planned to promote the party's traditional conservative values and to fight to increase rights for families in Sweden.
Busch Thor still needs to be formally elected by the Christan Democrats at a conference in Stockholm on April 25th, but is currently expected to go unchallenged.
If selected, she will become the youngest current political leader in the Riksdag. Annie Lööf, who is head of the Centre Party and Green Party co-leader Gustav Fridolin, both now 31, were nominated by their respective parties at the same age as Busch Thor.
A graduate in Peace and Conflict Studies at Uppsala University, she also grew up in the nearby town of Gunsta and has been active in the Christian Democrats since 2006.
Nominating committee chairwoman Chatrine Pålsson Ahlgren told the news agency TT that it had not been a difficult choice after the other finalist in the race, Jakob Forssmed, dropped out.
"Ebba is an extremely knowledgeable and competent Christian Democrat. A good captain of the Christian Democrats' ship," she said.
But the 28-year-old takes over a struggling party. The Christian Democrats only just reached the four percent threshold needed to secure seats in the Swedish parliament in the last general election in September 2014, having previously held top ministerial posts as part of the Alliance – the bloc of four centre-right parties that made up Fredrik Reinfeldt's coalition.
“Traditionally, it’s a very religious party, but they have been trying to build wider support for a while now, like the CDU in Germany,” political scientist Jörgen Hermansson at Uppsala University told The Local last month.