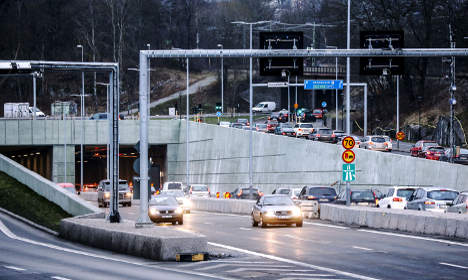 A section of Stockholm's "The Northern Link" highway. Photo: TT

Stockholm's Norra länken "The Northern Link" motorway will be completely closed off, resulting in a very high risk of long queues on roads across the city.

“There will be a difficult situation in and throughout Stockholm and we encourage people to leave their cars at home,” said Thomas Pihl from the Transport Administration's press office.

The highway was shut down in the evening of Friday March 13 and will reopen on Monday morning, March 16, due to plans to open the motorway up southwards to the Essingeleden motorway.

Numerous visitors are also expected to flock to the Stockholm area this weekend for the final of the popular Melodifestivalen Song Contest held at Friends Arena in Solna, as well as the Swedish Championship Bandy finals taking place this weekend at Tele 2 Arena at Stockholm Globe City in Johanneshov.

This means more traffic and more passengers in public transport, and the Traffic Authority is urging all travellers to keep in mind that travel time will be much longer than usual.

The Northern Link highway stretches from Essingeleden at Karlberg in the northwest to the exit for Vartahamnen and Lidingö in the northeast.