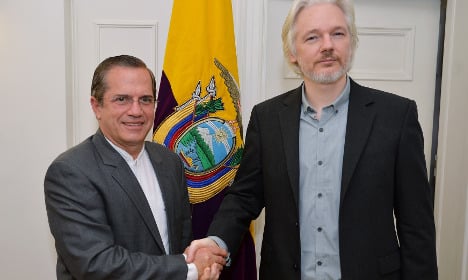 Julian Assange took refuge in the London embassy in 2012 to avoid extradition to Sweden and has been there ever since.

Up to now, Swedish prosecutors have refused to go to London to question the 43-year-old Australian former hacker over the allegations.

But the prosecutor in charge of the case, Marianne Ny, said last week she was dropping her opposition as some of the alleged offences will reach their statute of limitations in August.

"This allows us to see a light at the end of the tunnel," Ecuadoran Foreign Minister Ricardo Patino told reporters in Washington.

"That light is still not close, but this is the first time there is a movement in the Swedish judicial system suggesting that it may proceed with an interview."

The top Ecuadoran diplomat said he welcomed the Swedish move, but regretted it had not taken place earlier.

Last week Assange's lawyer Per Samuelsson told The Local that the Wikileaks founder viewed the development as “a great victory”.

"But simultaneously he was irritated that it took so long for the prosecutor to do her job properly…there is a mixture of feelings," he added.

“When she [the chief prosecutor] hears his version of events, we are convinced she will believe he is innocent and will drop all her suspicions,” he concluded.

Sweden issued an arrest warrant for Assange in 2010 following allegations by two women in Sweden, one who claimed rape and another who alleged sexual assault.

Assange has refused to go to Sweden to be questioned over the allegations, which he has vehemently denied, saying the sexual encounters were consensual.

He fears that Sweden would pass him on to the United States, where an investigation is ongoing into his anti-secrecy website's release in 2010 of 500,000 classified military files on the wars in Afghanistan and Iraq and 250,000 diplomatic cables which embarrassed Washington.

Patino said Ecuador has had no contact with the United States regarding the Assange case.

"At the beginning of this case, we asked the United States if there were proceedings against Assange, and they responded that they could not give us that information," Patino said.

"Since then we have not discussed the case."