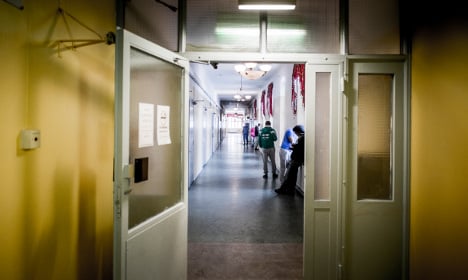 “We don't get enough places and we will not leave anyone stranded on the street. When we have looked for housing in the last three years we have looked for small centres, because we don't believe in larger ones. Collective housing is worse than your own home and the bigger it is the worse it gets,” he said.

Ali Salom, who lives at an asylum centre for 120 people in the Västmanland region in central Sweden, warned larger centres could put people at risk.

“It is crowded and very many people are depressed. The mood is tense and people can start a fight over anything at all, people can fight over a spoon,” he told Swedish Radio.

But Ribbenvik added that it is not the Migration Board's responsibility to request more staff at the centres.

“As far as criminality and protecting the citizens are concerned, it's the police. When it comes to psychological and physical well being, it's the county. You can't believe that everything that happens in society is the Migration Board's responsibility,” he told Swedish Radio.

Sweden receives the highest number of refugees per capita in the EU and is second only to Germany as a destination for Syrians fleeing the Middle Eastern country's civil war.
While the country's liberal attitude to accepting refugees has been praised by the UN, which has asked other European member states to share the burden with the Nordic nation, the country’s integration policies are in the spotlight.
Earlier this month it emerged that half of asylum seekers who were given residency in Sweden ten years ago and remained in the country were earning less than 13,000 kronor ($1570) a month. The average median wage in Sweden is 23,700 kronor a month ($2861).