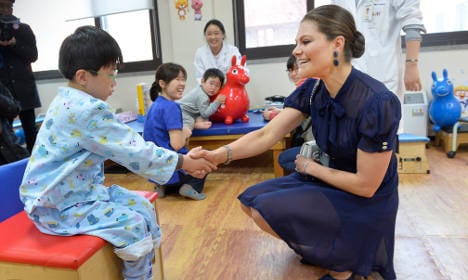 “I hear you have both spent time at home with the little Princess Estelle after she was born and that sets an example,” said South Korean President Park Geun-hye as the couple visited the presidential palace in central Seoul.

“I know that you take a great interest in social welfare questions, women's issues and childcare. And Sweden is ranked as the world's leaders in family issues and equality,” the country's first female president added, reported Swedish tabloid Expressen.

The Swedish royals had a jam packed schedule ahead of them on the final day of their three-day visit to South Korea.

On Wednesday they were set to visit Seoul's University for Foreign Studies to donate Swedish books. They were also going to open an exhibition in the memory of Swedish children's author Astrid Lindgren at the Seoul library, and of course have lunch with the Swedish ambassador.

IN PICTURES: Princess Estelle through the years

Sweden's King Carl XVI Gustav and Queen Silvia travelled to South Korea three years ago, and Prince Carl Philip was there just a few months ago to attend a conference on the environment. But it's Princess Victoria and Prince Daniel's first official visit to the country.

The trip has so far focused on environment, export and culture, and on Monday the royal couple visited the demilitarized zone at the border to North Korea.

“It is huge to be in this place. There's a line on the ground that divides a whole country and so many families…It's a great trauma to both countries and to the Korean people,” Princess Victoria was quoted as saying by Expressen.

In other royal news, Sweden is currently hard at work to prepare for the wedding of Prince Carl Philip and Sofia Hellqvist in June.

The schedule for the wedding day procession through Stockholm was disclosed last week. But the Royal Palace's press spokeswoman Margareta Thorgren kept her lips sealed when The Local tried to sniff out some gossip about royal and celebrity guests when we chatted to her on Monday.

"We do not disclose the guest list until everybody has replied to their invitations," she said.