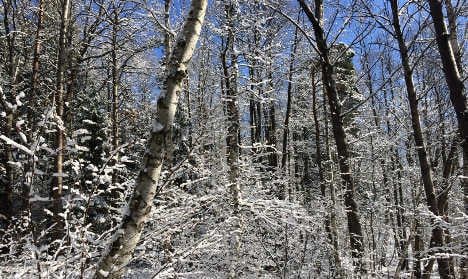 Snow in Stockholm on Saturday. Photo: The Local
Several centimetres of snow were expected to fall around Sweden's second largest city, while residents living further south were told they could get up to ten centimetres of the freezing white stuff.
"There will be a light snowfall over Gothenburg, a couple of centimetres of wet snow. We expect a lot more snow in northern Bohuslän and Dalsland, five to ten centimetres," Maria Jönsson, a meteorologist at the weather service Foreca told Swedish newspaper GP.
According to Foreca, fresh snow is also expected to fall in north west Sweden on Wednesday.
Swedes have a special word for this time of year, 'vårvinter', which literally means 'spring winter' and describes the transition period between winter and spring, which is not always straightforward.
After basking in record high temperatures earlier in the month, parts of southern Sweden have already experienced a fresh cold snap, including Stockholm were snow settled last weekend. Snow near Huddinge, just outside Stockholm, on Saturday. Photo: The Local
Check the weather forecast for your part of Sweden
Forecasters predict that the latest snowy spell in the south and west will pass by Thursday, with sleet turning into rain and dry weather returning by the weekend.
"There will be fine spring weather with sunshine and up to ten degrees and light winds," Maria Jönsson told GP.
She added that it was "hard to say" what the weather would be like over Easter, adding "I dare not promise any spring warmth".
Earlier in the month, American weather institute WSI predicted that Sweden would experience a much warmer spring than usual and said that higher temperatures would linger through until May.

“March looks set to be the month when temperatures will reach the highest levels above average. Northern Sweden might see 6C above average. The rest of the country will be at least one degree warmer than normal,” meteorologist Michael Ventrice told Swedish newspaper Expressen.

IN PICTURES: Your March spring snaps