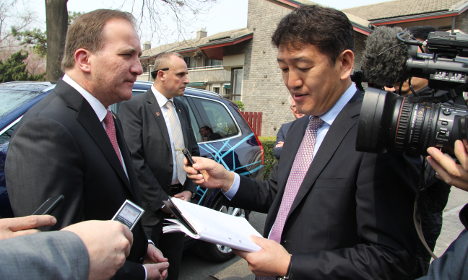 Löfven will be meeting two of the world's most powerful men during his visit: Prime Minister Li Keqiang on Friday and President Xi Jinping on Saturday.

Ahead of the visit, Löfven came under fire in Sweden for refusing to refer to China as a 'dictatorship'. And he repeated to reporters outside the Swedish Embassy on Friday morning: “It is a one-party state that has no public elections.”

“The purpose of foreign policy should not be to put labels on countries. We will bring up issues we would like to change in friendly spirit with the other country,” he told Swedish media earlier this week.

And Foreign Minister Margot Wallström echoed: “I understand it is tempting to ask such questions and list all various countries. I don't think we should be doing that.”

Amnesty International has previously criticized China for arbitrarily imprisoning people, limiting freedom of information and the prevalence of torture, and has ahead of Löfven's visit asked him to raise the issue of capital punishment of political prisoners.

"Every time you bring up human rights you show that the rest of the world cares about the issue," Elisabeth Löfgren, Amnesty International press secretary in Sweden, told news agency TT on Friday.

With a total export value of 40 billion kronor, China is Sweden's most important trade partner in Asia and Swedish companies are likely to pay close attention to Löfven's visit, which comes just weeks after Sweden got embroiled in a diplomatic spat with Saudi Arabia over human rights.

“It would be devastating if we dared not say anything about China's behaviour just because we've been slapped on the wrist by Saudi Arabia. Sweden has a small, but powerful voice when it comes to human rights," said Löfgren.

Saudi Arabia recalled its ambassador to Sweden earlier this month, along with several other Arab League nations, and accused Sweden of "flagrant interference in internal affairs” over comments made by Wallström.