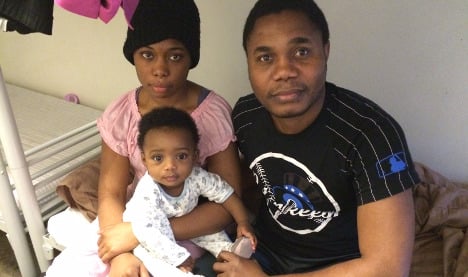 Lloyd Justus from Nigeria (right) and is family are seeking asylum in Sweden. Photo: The Local
Slumped on plastic chairs, some hugging battered suitcases, others appearing to have travelled without a single belonging, most of the latest asylum seekers to walk through the doors of the Märsta reception centre look visibly shattered. For many, the journey to Sweden has been a long and painful one.
“It was disgusting. I can't speak about it now. I don't want to remember [it],” says Matios, 28, from Eritrea, who travelled to Italy by boat before making his way to Stockholm by train.
“It was hard for me. It was long journey and some of my friends died along the way, while they were with me,” he adds, shuffling his feet and gazing at the floor.
He doesn't want to have his photo taken, but raises his eyes and speaks firmly when asked about why he is seeking a new home in the Nordic nation.
“There is unlimited military service in my country, that is the main problem. I chose Sweden because there are human rights in Sweden. You can speak freely about whatever you want”.
His words are echoed by Emad, a 22-year-old from Libya, sporting a hoodie and a lot of hair gel.
“Sweden has the top reputation, everyone is talking about Sweden,” he says.
His boat from Benghazi docked in Malta before he flew with Ryanair to Copenhagen and then caught the train to Stockholm.
“I came here because I have a problem in my country…everyone is killing each other,” he explains in a mixture of Arabic and English.
“I hope to stay here and relax…I hope to also find work, to buy a car and make a future here. I will do any kind of job. If I find work, I will do it.” Emad Birsali is seeking asylum in Sweden. Photo: The Local

Märsta is the first port of call for hundreds of refugees arriving in Sweden every week. The bland, red brick building complex currently houses up to 150 people each night, in single sex dormitories or family rooms. Anyone seeking asylum and without an address in Sweden is entitled to seek temporary emergency accommodation for up to three nights while they wait for their initial application to be processed. The centre is open 24 hours a day, seven days a week.

“The rooms are just very basic but we do have cleaners every day,” says team leader Anna Andersson as she opens the door to a huge storage room piled high with sky blue plastic zip-up laundry bags.
“These are the welcome packs we give everyone. There's a pillow, blankets, a towel, a toothbrush, a toothpaste and toilet paper. And you can take this with you when you go.”
“We try to make people comfortable. There is also common area for watching TV and relaxing. We have a kids area here, although now it is in need of repainting,” she adds, pointing to an empty cluster of child-sized tables and chairs and a wall covered in scribbles.
“We did have lots of toys donated at Christmas time, but they moved on with the visitors.” Staff member Anna Andersson with the welcome bags given to refugees. Photo: The Local
Sweden is seeing its asylum requests rise to record levels, with about 90,000 applications anticipated by the end of 2015. Numbers have been steadily rising since the Nordic nation became the first European country in 2013 to grant automatic residency to Syrian refugees, but it has also accepted thousands of others from nations including Eritrea, Iraq, Afghanistan and the Balkans as well as a growing influx from Somalia.
To cope with the increasing flow of refugees, the Swedish Migration Board announced this week that it had more than tripled the maximum number of residents allowed at asylum centres from 200 to 650. The government says it wants to continue providing security for refugees, but has called on other EU member states to share the burden. Currently only Germany processes more asylum applications.
While the majority of Swedes support their country's open door policy, it has been linked to rising support for the nationalist Sweden Democrat party (now the third largest political group in Sweden), and growing numbers from across the political spectrum say they are concerned about how the government is tackling integration.
In the short term, pressure is also mounting on staff at immigration centres such as Märsta, who are facing an increasingly heavy workload.
“Sure, of course we have felt that it has been growing and that more people are coming,” says Andersson, appearing to choose her words carefully.
“It's been more necessary to plan better to make sure that we have beds for the night. But I would say we have coped well,” she adds, explaining that staff work hard to avoid the “nightmare” of having to turn people away.
“A bed is what I would want after travelling far and being tired and arriving somewhere. I mean a bed…it's only a bed, it's not the end of the world,” she says, keen to stress that her role fits into a much bigger jigsaw puzzle. Sweden's Migration Board (Migrationsverket) offers translators in many languages. Photo: The Local

Immigration officials at Märsta conduct interviews with each new asylum seeker and take fingerprints to check that they have not already been registered elsewhere in the EU. Those who have could be sent back, because of EU laws stating that all migrants should have their claims processed in the member state in which they first arrive. Those judged to be genuine applicants are transferred on to a second processing centre in Gävle, a ninety minute drive north. They spend several more days there while their paperwork is dealt with before being sent to more permanent housing elsewhere in Sweden. The country aims to consider all asylum requests within three months, although for some it can take considerably longer.

“I have high hopes for my future here. This is where I want to be. I am very relieved that I made it,” says Refaat Sharrook, a Syrian dressed in a smart suit for his first meeting with Swedish officials.
“I praise God that I have made it to this land that I have heard so many positive stories about,” he adds in Arabic.
The 37-year-old plans to meet up with other business contacts from his homeland who have already been granted asylum.
“I used to work in the car industry and I have connections here,” he smiles, clutching his mobile phone and a pile of documents.


Refaat Sharrook from Syria hopes to find work in Sweden. Video: The Local

But his glaring optimism is juxtaposed with the grief of a young Nigerian family staying in a room across the corridor. They have spent the past year seeking asylum in Sweden and have returned to Märsta in a desperate bid to have their case reviewed, after being told to fly home or return to France, the first EU country they landed in.
“We have met a lot of people who have told lies and thrown their passports away in order to help with their asylum applications,” says Lloyd Justus, 35, gripping the hand of his wife Princess, 20.
“As practising Christians that [idea] was very difficult for us…but maybe we were the stupid ones,” he sighs as their seven-month-old baby starts crying.
The couple, who lived in Libya until 2012, say they have no relatives left in Africa and are scared that their home country is becoming more and more violent. But unlike Syria, Nigeria is not considered a war zone by the EU, and its people are not automatically granted asylum in Sweden.

The playground at the reception centre. Photo: Maja Suslin/TT
The pair tell a complex and sometimes confusing story about being shunted between different housing projects and separated following the birth of their child after falling out with one another as well as the Swedish authorities. While Princess was given a room in a Swedish woman's home by Social Services, Lloyd says he spent several months sleeping rough and in African churches, surviving by picking cans off the streets and swapping them for food bags handed out by various charities.
“After all this we have been told we have to go back to France. The thing is we didn't understand the visas when we got them, we were just looking for a better life. In Nigeria its a very corrupt place – you buy a visa to get you to Europe for 10,000 US dollars. You don't have a choice for Italy, Greece, Sweden. It's not like that in Africa, whatever you are offered, you take”.
With tears in his eyes he adds: “I have thought many times about committing suicide. The only reason I didn't commit suicide is because if I kill myself Jesus is not going to accept me into heaven, I am going to go to hell.”
Sweden's Migration Board cannot shed any light on the couple's prospects. The authority does not discuss individual immigration cases with the media.
But as yet another handful of immigrants shuffle through the immigration centre's doors while the sun goes down, it is clear that whatever happens to Märsta's current crop of arrivals, officials are set to have their work cut out for the foreseeable future.
All interviews were conducted on March 2nd 2015