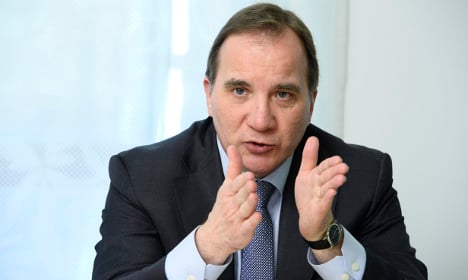 At a press briefing Löfven said that it was “tough” campaigning for a spot on the 15-member UN Security Council in 2017-18, but that he had noticed “a great interest in Sweden” during his visit to the US.

Sweden is building a case for itself based on its commitments to the rule of international law, development, disarmament and human rights.

Stefan Löfven said that if is country were to secure a place, he would push to do more to help tackle current conflicts, adding that “the world has not succeeded when it comes to Ukraine or Syria”.

Speaking to a crowd of international journalists, the Social Democrat leader reminded them of his country’s “feminist” foreign policy, and said that he was looking for female colleagues to work alongside the three men appointed as honorary ambassadors for Sweden's Security Council candidacy – former Foreign Minister Carl Bildt, former Prime Minister Göran Persson and former UN Ambassador Pierre Schori.

“It's not the end of this trio, we will want to have the help of several people, women will help us,” he said.

The UN Security Council has primary responsibility for the maintenance of international peace and security. It consists of five permanent members with veto powers (US, China, France, Russia, UK) and ten non-permanent members, elected by the General Assembly for a two-year term.

Both Italy and the Netherlands are also vying for spots on the council during the same period as Sweden.

“We’ve been candidates since 2004, but it’s never been pushed so hard until the current government took power in the fall,” said Hans Dahlgren, the Prime Minister’s State Secretary for Foreign and EU affairs over the weekend. He was a UN ambassador the last time Sweden had a chair on the Security Council in 1997-1998.

Stefan Löfven’s official reason for visiting the US was to deliver a speech at the United Nations Economic and Social Council, where work is going on about moving forward with sustainable development goals. His talk on Monday focussed on fair working conditions.

On Tuesday, he will give a talk on globalisation at the Brookings Institute, a renowned think tank, before meeting US Vice-President Joe Biden at the White House.

Talks with Biden will centre on the situation in Ukraine and the radicalisation of young people who join jihadist groups such as Isis.