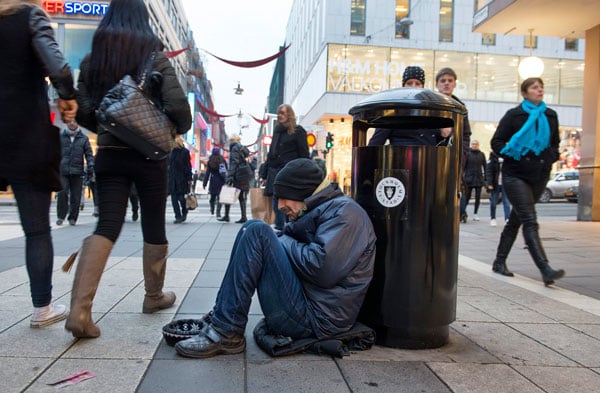 The opinion poll, conducted during the last week in March, asked 1,198 Swedes the question: “is it a good or bad idea to ban begging?”

Of those, 49 percent said it was a good idea.

When the same question was asked in September last year, 36 percent answered in the affirmative.

The percentage against a ban also sank from 46 percent in September to 36 percent in the recent poll.

It does not appear that the Aftonbladet poll was an outlier. A similar survey conducted by Novus Group for Sweden’s TT news agency in early March found that 56 percent supported a begging ban.

But Prime Minister Stefan Löfven told Aftonbladet that a ban was not something his government was considering.

“Legislating against poverty is a waste of time,” he said.

Norway's government dropped a plan to ban begging in early February after strong pushback from Norwegian opposition parties and rights campaigners around the globe.

That legislation would have banned both begging and “cooperation” with beggars. Penalties would have included fines or up to a year in jail. The minority right-wing government had linked begging to rising crime rates.

But rights groups described the proposed law as draconian and against Nordic traditions of tolerance.